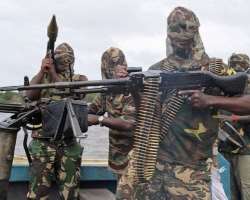 PORT HARCOURT, July 14, (THEWILL) – A statement from the notorious militant group operating in the Niger Delta oil area, Movement for the Emancipation of the Niger Delta (M.E.N.D) has accused the federal government of ‘displaying double standards’ in its handling of detained members of the radical Islamic sect, Boko Haram, who have claimed responsibility for the series of bombings in the north and the Police Headquarters in Abuja.

MEND in the statement by Gbomo Jomo, said it “views with scorn the recent statement by the security services spokeswoman Mrs Marilyn Ogar, that the over 100 Boko Haram members recently arrested in connection to the police headquarters bombing in the Federal Capital Territory, Abuja will not be prosecuted but will be resolved politically.”

Adding that, “This is a blatant disregard to all Christians in Nigeria killed with impunity and also an insult to all Niger Deltans as the government is displaying double standards as regards the Niger Delta indigenes falsely and unlawfully arrested over the October 1st bomb blast carried out by our field operatives.

“While the kangaroo justice system being displayed by the South African courts which is obviously playing by a script drafted by the their bosses, the Nigerian Government, continues to detain Henry Okah in unacceptable conditions without a shred of evidence linking him to our action, except that he is a highly respected individual by MEND and other groups in the Niger Delta, his brother, Charles Okah and others arrested with him are languishing in Kuje prison, Abuja still without any proof linking these individuals.

“The Nigerian government till date has refused to dialogue over addressing the injustice in the Niger Delta preferring instead to deceive the world into believing that the Niger Delta issue has being resolved by the government of Goodluck Jonathan who has only being successful in bribing a few miscreants. For this attitude, we re-iterate our lack of respect for President Goodluck Jonathan as we view him as a spineless wimp and a coward who is willing to sacrifice the lives of Niger Delta indigenes to please the Western governments and oil companies.

“The Movement for the Emancipation of the Niger Delta (M.E.N.D) is preparing very hard for the resumption of hostilities with the training of new fighters joining our various camps and promises that the results will be felt both nationally and internationally, very soon,” the statement added.