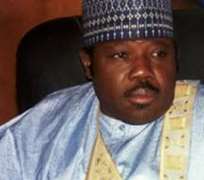 A former governor of Borno State, Alli Modu Sherrif, accused of being the godfather of the violent Islamic sect, Boko Haram, met with President Goodluck Jonathan at the Presidential Villa, Abuja, on Wednesday and denied his alleged links with the group.

Sherrif's denial came as the military said it would tackle the recent threat by Boko Haram to attack more military facilities.

Sherrif was also at the headquarters of the State Security Service on Monday, fuelling speculations that he was being investigated for his links with the group.

The ex-governor, however, said he was neither quizzed by the SSS nor summoned by the President on the matter.

While the Presidency refused to provide the details of the briefing Jonathan received from the ex-governor of Borno State, THE PUNCH gathered that Sherrif told Jonathan that he was merely being called a bad name by his enemies in order to nail him.

'Saying that I am a mentor of Boko Haram is most unfortunate and there is no truth in the statement,' Sherrif told journalists after his meeting with the President.

The Chairman of the Arewa Consultative Forum, Lt.-Gen. Jeremiah Useni (retd.), had led a team of Northern elders to a meeting with the President and Vice-President Namadi Sambo on Tuesday and told journalists afterwards that Sherrif used members of the sect as thugs during the governorship elections in Borno.

The group, which said that it had declared a war against the Nigerian state, has claimed responsibility for a number of bombings in the country, including the June 16 bombing of the Louis Edet House headquarters of the Nigeria Police Force in Abuja.

Striving to clear his name, Sheriff said, 'Boko Haram was in existence before I became a governor. The so called leader of Boko Haram had been arrested and executed in Abuja before I even thought of becoming the governor of Borno State. So, people (shouldn't) make comments on what they don't know. In life, you don't speak on matters that you are not very competent about.'

Sherrif became the governor of Borno State in May 2003 on the platform of the All Nigeria Peoples Party. He served two terms, leaving office this year.

Boko Haram, meaning 'Western education is sin,' was reportedly founded in 2002 in Maiduguri, Borno State capital, and set as its mission the establishment of Sharia law and Islamic government in Nigeria. The group gained notoriety in 2004 when its members set up a base in Kanamma, Yobe State. They named the base 'Afghanistan'. From Afghanistan, Boko Haram elements moved out to attack nearby police outposts, killing police officers.

An estimated 700 people have so far been killed in Boko Haram attacks in the northern part of the country.

An online publication, Times of Nigeria, on Tuesday said the group had sent a hit list made up of some prominent Northerners, including the Vice President, to the SSS.

Also the group was said to have distributed leaflets in Maiduguri vowing more attacks on military barracks as a response to the Chief of Army Staff, Lt.-Gen. Azubuike Ihejirika's description of its members as 'cowards'.

The Director of Army Information, Brig. Gen. Ralphael Isah, told one of our correspondents on Wednesday that while the military would not treat the threat with levity, it would not want the public to dwell in fear.

'I am sure that is their propaganda machinery. It is expected that they will say things that will make them relevant. I don't think anybody should help them to spread such propaganda,' he said.

Reacting to Useni's allegation, Sherrif said, 'That report is not correct, I saw it on the pages of newspapers today (Wednesday), but since I haven't spoken to General Useni, I would give him the benefit of the doubt. But, now that you (journalists) said that he was here and he told you that, that story is not correct.

'He said that he saw people selling petrol on the major streets of Maiduguri. NNPC depot in Maiduguri did not receive petrol from Kaduna refinery for over 15 years and marketers go to Kaduna and Lagos to get petrol and people buy it and sell.

'Boko Haram and the boys selling petrol are two different things. In any case, I did not even introduce the selling of petrol in jerrycans to Borno State. It was in existence before I came.

'If all the past military and civilian governors in Borno State did not ban the sale of petrol outside petrol stations, why should I come and ban people who were legitimately earning a living?

'So, that report is most unfortunate and I am surprised that somebody like General Useni made such public statements, in spite of his age.'

On the current military operations in Maiduguri, he said he had left town before the military moved in.

'Since I left government, I have not gone to Maiduguri and, therefore, I don't know what they said the JTF had done. So, at my level, I will never make a comment on what I don't know.'

Meanwhile, reactions have continued to trail the violent activities of the sect. On Wednesday, the Pentecostal Federation of Nigeria advised churches in the northern part of the country to be vigilant. The Chairman of the PFN in Ekiti State, Pastor Ola Adejube, said this at a news conference in Ado-Ekiti. Also the General Secretary of the Nigerian Baptist Convention, Rev. Olasupo Ayokunle, at a news conference, expressed regrets that contrary to its claims, the Federal Government was not on top of the situation. However, the Kaduna State Governor, Mr. Patrick Yakowa, on Wednesday ordered that 15 buses be sent to Maiduguri to immediately evacuate students of the state origin in Borno State.