Mark: NASS Will Stop Any Attempt To Derail Democracy 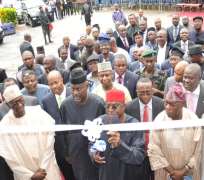 CALABAR, July 11, (THEWILL) - The National Assembly says it is in the forefront to stop any attempt that is aimed at derailing democracy in the country.

The President of the Senate, Senator David Mark stated this at the official commissioning of the administrative building of the Cross River State House of Assembly, Calabar, adding that their action is imperative because many people do not understand how much effort it takes to legislate.

Mark commended the maturity of the members of the Cross River State House of Assembly for working under harsh conditions for 12 years and never thought of impeachment, stressing that it will not be an understatement that the legislature is the engine room of democracy as the first three years of the present democracy was difficult and now legislators are on track with mutual respect to the executive so that the people can enjoy the dividends of democracy.

He thanked Governor Imoke for giving the State House of Assembly a befitting edifice to deliberate because passing of bills remains the corner stone of legislative agenda to the development of the State.

Governor Liyel Imoke of Cross River State said that the legislature is the only arm of government which has suffered adverse consequences from military incursion into democracy, saying that there is need to appreciate it as one of three arms of government.

Imoke explained that for 12 years, members of the State House of Assembly did not have adequate facilities to function maximally, adding that it is critical to understand what it takes to legislate using resources and capacity as it behoves on the State Government to develop such structures.

The governor noted that it is the responsibility of everyone to understand that democracy must be a success and all participatory, stating that the relationship between the executive and legislature in the state is cordial and worth emulating while the immediate past assembly had passed more bills than their colleagues in the country despite the harsh condition it operated from.

The Speaker of the Cross River State House of Assembly, Hon. Larry Odey in a welcome address, described the commissioning as a watershed in the history of legislature in the State, explaining that three different assemblies had within the span of 12 years offered services to the state under hard harsh conditions.

The Speaker disclosed that within the period they converted their cars into offices and car park as meeting avenue, and that the event witnessed another era ushering the fourth assembly into a new era, reasoning that the facility has all it takes to increase capacity and enhance productivity.

Odey assured that the assembly will collaborate with the executive and give speedy deliberation on bills sent in by the latter for the advancement of Cross Riverians while receiving the building as a gift from the governor, a day before his birthday.

He thanked the President of the Senate, Senator David Mark for accepting and honouring to perform the commissioning of the edifice.