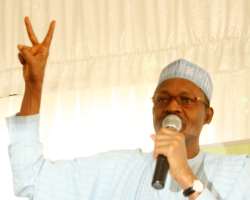 Unlike most people who simply read and consume the daily chronicles and stories of their time for information and decisions, students of strategy like those of history and politics have a quirk: they read and follow events looking for what the big issue is. They, unlike others, like to identify what the main issues that stand out during an event are. They race each other to see the first to identify what will remain in history after all is said and done; they are more interested in the imposing phenomenon that will be revisited in years to come.

During the recently concluded Nigerian elections, one of the five most imposing phenomenon was the General Muhamudu Buhari candidacy. It must be said, Buhari’s candidacy was a challenge and a contradiction to the norm. In a country where the average citizen accepts, as a matter of course, that even the best performing politicians cannot be totally free of corruption, Buhari stood out as a man of integrity. Even his most ardent critics and enemies could not link him to anything shady. All they could do was to condemn him as yes clean but incapable of dealing with a complex Nigeria.

In a country where electioneering and indeed the whole political process is untowardly money powered, godfather driven and the keywords in politics are terms like mobilization, crowd renting and settling, the General, with very little financial resources at disposal and in most cases, against the establishment, filled stadiums and brought many cities in the north to standstill. Raw charisma and the belief that one man can fix the woes of a people were on display for lovers of politics and sociology to palpate. The last time any part of Nigeria saw such a charismatic led relationship was in the days of late chief Obafemi Awolowo.

Just like Awolowo, Buhari lost the elections; unfairly, his team believes, hence they are in court. Analysts have listed an array of reasons for his loss fairly or unfairly, as the case may be. The feeling from the most generous is that even if Buhari was rigged out, that was because he was riggable. From a strategic point of view, the General lost because he failed to connect with the middle ground in Nigeria, where he was perceived as rigid, unimaginative and maladaptive for business; he could have done more to convince and inform them about his vision and PTF past, but his team failed. He failed to connect with the southern part of the country, where his charisma was less imposing and where people had their own agenda. His team needs to ponder on these factors.

As for the man himself, he went into elections declaring it was the last time he would contest for office; he acknowledged his country had given him a lot and all he wanted to do was give back: a selfless endeavour for the future of his country. He now needs to find a way to live up to those declarations.

Now that all partisan battles are over, the General has the right to retire to be a father and grandfather and to enjoy a quite life in his Katsina and neighbouring states where he has earned himself the status of a demigod that is his prerogative but it will not be heroic.

His biggest burden, his heroic burden is to live on civically. His burden is not to prove that he is not behind the crises of the North as some have lazily and maybe even mischievously suggested. His biggest and most noble challenge is not be the leader of the north but to be a source of influence and inspiration for generations to come in Nigeria and indeed Africa.

Thanks to his acknowledged past as a man who has had access to public treasury and not looted it, he can go about teaching and inspiring young people and even current public holders that it is possible to resist the temptation of looting. In a country where most admit corruption is the biggest problem that alone can be a priceless gift to all.

In a system where unaffordable flamboyancy and kitsch squander is becoming a mode of proving existence and measuring success, Buhari could use his life and lifestyle to showcase a possible alternative.

Rather than impose discipline as he could do as military ruler, he can now teach it and inspire it without an office. That of course is more arduous, but so is the nature of heroic burdens.

He has been accused of Islamic fanaticism, during elections, he tried to explain he was not, let’s face it, his attempts were less than impressive, now that he has no office to gain, he can come out not only explain that he is not a fanatic but also teach the world the difference between commitment and fanaticism.

In doing all these, without bitterness and without bidding for any office, the General will get the fantastic but uneasy task of giving the world a useful lesson on how to be a leader without a title and for no self interest.