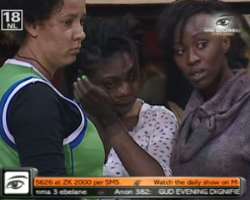 After Karen's failure to Save and Replace anyone during the Nominations Show, she stormed out of the House and burst into tears.

Mumba, Millicent, Bernadina and Vina ran up to her and were almost at a loss for words trying to comfort her.

This was the first time that the Head of House had first nominated herself and later stuck to her decision.

Luclay once put himself up for possible Eviction and by Africa's grace, he was saved. It remains to be seen if Karen will be equally lucky.

Perhaps Karen and Luclay do have something in common after all... Meanwhile, Karen eventually calmed down and dashed upstairs where she was joined by her love interest, Zeus.

The Nigerian Housemate got a fair dose of Head of House lecture from her fellow countrymate Vina as well as Zeus.

The two told her about the stress and pressure that comes with Nominations and Eviction days but all their advice had nothing to do with what she was feeling at the time. She wasn't feeling guilty because she had betrayed anyone but for her, the issues were deeper: she had put her own life on the line...

You can text KAREN to 34350 to save karen from being evicted.