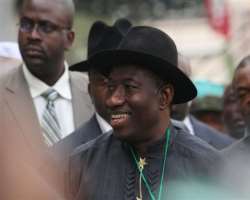 SAN FRANCISCO, June 29, (THEWILL) - President Jonathan has advocated the establishment of a tax regime on goods imported into Africa, as a means for revenue generation, which will in turn complement the funding of infrastructural projects in the continent.

The President stated this today while presenting Nigeria’s debate on mobilizing resources for funding development projects in Africa using the Nigeria-Algeria trans-Saharan gas pipeline project as an example, during the 25th Summit of the Heads of State and Government Orientation Committee of the New Partnership for African Development (NEPAD).

The President cited the ECOWAS five per cent tax regime on goods coming into ECOWAS countries from outside the sub-region, saying revenue generated from this policy has helped significantly to finance intervention projects within the sub-region.

In this regard, President Jonathan proposed that the African Union should set up a technical committee to place tax benchmarks on identified goods and raw materials that are imported into the African continent. He said revenue generated from such policy will go a long way to complement funding of development projects under public private partnership initiatives.

“If at the level of the continent, we set up a technical committee to place tax on some of the goods and raw materials that come into the continent from other parts of the world, this will be a source of funding that could complement any PPP arrangement, and finance critical social and health projects including the burden of HIV/AIDS and other related health challenges in the continent,” President Jonathan stated.

On the Nigeria-Algeria gas pipeline project, President Jonathan said the $20bn trans-saharan project, expected to be completed in 2015, will transport about 30 billion cubic metres of natural gas from Warri through Niger Republic to Algeria.

He said the gas pipeline will be operated by the Nigerian National Petroleum Corporation of Nigeria and the Sonatrach of Algeria, both of which will hold 90 percent shares of the equities of the project, while the national oil company of Niger Republic will hold ten per cent equity.

“The objectives of the project are to diversify the export route of marketing Nigeria’s natural gas and engender closer cooperation and integration among countries in the pact so that Nigeria, Niger, Burkina Faso, Mali as well as Algeria, in line with NEPAD objectives, can create wealth and alleviate poverty by opening up economic growth opportunities in the sub-region and boost domestic gas supply in the continent,” the President explained.

“Nigeria will keep faith with the trans-Saharan gas pipeline project. The PPP option is what Nigeria looks up to but it is not easy to mobilize funds as much as $20bn for instance for the gas pipeline project. If the PPP option is exploited for most development projects in Africa, we will be able to achieve accelerated development and make concrete investment for our people.”

The President urged the members-states of the AU to redouble commitments to the vision of NEPAD which is ten years in existence so that at the silver jubilee and subsequent anniversaries.

“We would have attained very concrete achievements in terms of African development,” he said.

Also contributing, President Jacob Zuma of South Africa noted that funding commitments by African leaders towards development projects should be backed by sufficient political will to see the projects to successful completion.

In his brief remarks, Chairperson of the African Union Commission, Mr. Jean Ping, urged member-states of the AU to live up to their funding commitments for NEPAD in order to realize the objectives of the initiative.