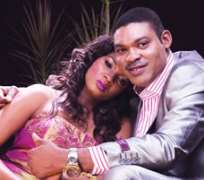 After a lot of speculation making round that the marriage of talented actress Omotola Jalade Ekehinde is under threat following a butt-grabbing incident by one of her escort at the 2011 Grammy Awards in Los Angeles, the actress and her hubby opens up some days back and debunked the rumour that there is no iota of truth in the story.

To further substantiate that their marriage is still intact, the couple are off to UK to rekindle their love.

Both reportedly travelled on Saturday, June 25, 2011 and will be there for many days.