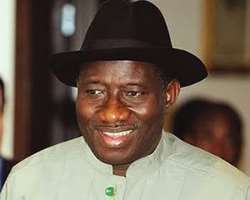 Jonathan
The Senate yesterday unveiled names of 34 ministerial nominees forwarded to it by the Presidency on Monday. There were protests from state chapters of the ruling Peoples Democratic Party (PDP) over alleged removal of candidates. Missing on the list is former Finance Minister, Prof. Ngozi Okonjo-Iweala touted to be a favourite. Also missing are nominees from Cross River, Plateau, Ondo and Kaduna states. Screening of the nominees is expected to commence today.

Senate President David Mark, who read the letter conveying the names of the ministerial list also read a communication from the President requesting the Senators' approval for him to appoint 20 Special Advisers.

Constitutionally, the Senate is not empowered to screen Presidential Special Advisers. It could only give approval to the number the President intends to appoint.

According to the list, dated June 27, two former Senators made the list which has 12 returnees and 22 nominees with their states of origin affixed.Four states-Cross Rivers, Plateau, Ondo and Kaduna-have no nominees in the list, fuelling speculations that another batch is in the offing.

However, the Senate has dispelled rumour of planned preferential treatment to the nominees during confirmation, saying the screening expected to commence today, will be thorough. Senate Leader Victor Ndoma Egba who briefed reporters, said the Senators were set for the screening in line with the president's request.

However, reactions have continued to trail the ministerial list as state chapters of the ruling PDP either commended the President over the list or condemned it.

From Ogun State, elders and leaders of the party kicked against what they called 'wicked removal of the state's original nominees, Senator Iyabo Obasanjo-Bello and Mr. Toyib Odunowo, and their subsequent replacement by one Akinwunmi Adesina and Nigeria's former High Commissioner to South Africa, Olugbenga Ashiru'.

In a statement issued by their patron, Alhaji Adegoke Agboola, the party stated that it was 'unthinkable that party men and women, who toiled night and day to ensure the victory of the party and President Goodluck Jonathan at the polls were being brushed aside now that appointment are being made'.

The party leaders lamented that, if not addressed, the situation could spell doom for the party in the state.

According to them, while the party could easily reckon with the exploits of the other stakeholders, such as Senator Iyabo Obasanjo-Bello-led Iyaniwura Foundation, Omoilu Foundation, Prince Ladi Adebutu-Kessington and Toyib Odunowo, in delivering the state to the PDP, the same, they argued, could not be said of Adesina and Ashiru.

'These people -Senator Obasanjo-Bello, Adebutu-Kessington, Odunowo and other leaders and stakeholders- committed their hard-earned resources, running into billions of naira to fund the party since there was no patronage from the state government. All these people have distinguished themselves in their chosen fields of endeavour. They are also technocrats in their own rights,' the statement read in part.

From Lagos State, a group operating under the aegis of Lagos State Indigenes Alliance, has threatened to stage a public protest against the nomination of former Finance Minister, Dr. Olusegun Aganga.

In a petition sent to the Presidency and signed by the co-ordinator, Alabi Kosoko, copy of which was made available to newsmen yesterday, the group restated the claim that the former Minister is not an indigene of  Lagos State but from Edo and should not be allotted the slot meant for Lagos.

'It was with great shock and utter disappointment that we received the news that you have decided to repay our hospitality by nominating an Edo son to replace the slot meant for an indigene of this state.

'Those who drew up the constitution had reasons for putting this clause and expect all national leaders whom God has chosen to respect it. Lagos was thrown into mourning today upon hearing the news. If you want Aganga so much, please, give him Edo slot or Bayelsa slot.'

The group further noted that because of the infraction, members of the party in Lagos State, who can not stomach the development would soon defect to the opposition party, ACN,  except the anomaly is corrected.

'Your members in PDP are all leaving the party for ACN. The situation is terrible.  Please, take this matter with seriousness it deserves. Give Lagos State its due. It is our right as part of Nigeria', the petition read in parts.

The President, however, got a pat on the back from a strange quarter, as the Ekiti State chapter of Conference of Nigerian Political Parties (CNPP) described the ministerial list as 'one of the best ever presented in the country'.

The political-pressure group commended the President on the inclusion of the former Minister of State, Federal Capital Territory, Navy Captain Olubolade on the list, charging the state chapter of PDP to desist from blackmail and campaign of calumny against the former Bayelsa State military administrator.

Describing Olubolade's choice as the best for the people of the state and PDP, CNPP, which is the umbrella body of all the political parties in the country, advised PDP chieftains in the state to fashion out ways on how to strengthen party in the state having lost virtually all political positions to ACN in the last election instead of pulling down the preferred ministerial nominee.

In a statement made available to newsmen in Ado-Ekiti by CNPP's Director of Publicity and Strategy, Ilesanmi Omolayo, the group berated PDP leaders, who were behind the petition condemning Olubolade's nomination as minister.

The statement read: 'the PDP leaders should rather coalesce efforts and give total support to Olubolade, instead of promoting disunity within the party, which has been in disarray   since the conduct of the last elections'.

The body, therefore, commended the President for disregarding the calls for the dropping of the former Minister's name from the ministerial list, describing the President as an independent-minded leader.

Discordant tunes continued to emanate from the crisis-ridden chapter of the PDP in Ondo State as a faction of the party kicked against the alleged initial inclusion of Mrs. Omobola Johnson in the ministerial list.

Operating under the name of Interim Management Committee of the party, the group stated that it had written a protest letter to the Presidency asking it to drop the name of Johnson from the list.

Addressing reporters in Akure, chairman of the committee, former Nigeria's Ambassador to Greece, Prof. Olu Agbi said the group rejected the choice of Mrs. Johnson because it would further worsen the crisis in the party.

He wondered why her name was short-listed when she was not included in the 10-man list originally sent to Mr. President.

But the state executive council of the party said the President had not committed any crime by selecting Mrs. Johnson

A statement issued by the Publicity Director of the party, Mr. Ayo Fadaka, noted that the President had the right to choose from within or outside the list sent to him by the party leadership from the state.

Fadaka noted that party leadership respected the decision of the Presidency to choose a competent hand as the state representative in the federal cabinet.

'This is premised on the fact that it is his (President) inalienable right to pick whoever he desires to help him in administering the nation, moreover Mrs. Omobola Johnson is from a prominent family in this state, properly brought up and a technocrat of no mean repute', the party stated.

But, Agbi insisted that Johnson has no relevance in the PDP circle in Ondo State.

His words: 'Speculation is rife that one Omobola Johnson's name had been sent to the Senate for confirmation. We want to state clearly that her name is not known to the PDP in Ondo State.

'The woman is married to retired Brigadier Mobolaji Johnson in Lagos, she is not deeply rooted in Ondo State politics. We need a minister that can be a rallying point and that can fund the party, not just anybody,' Agbi explained.

He, however, suggested that Mrs. Oladunni Odu should be given the Ondo State slot because of her closeness to the members of the PDP.

But Fadaka said since Mr. President considered Johnson appropriate for the position, those kicking against her choice were doing so out of frustration.

'Those who are rooting for another personality as against the party's choice are doing so out of frustration. Mr. President has the right to pick anybody that he feels can work with him

'When Tokunbo Kayode was picked the other time, was he the best among the PDP members? No, he was not the best for the position. The President has spoken and he has spoken well', Fadaka added.

Meanwhile, electricity workers in the country, under the auspices of National Union of Electricity Employees (NUEE), have condemned nomination of Prof Barth Nnaji.

In a statement issued in Abuja, yesterday and signed by its Zonal Organizing Secretary, Mr. Temple S. Iworima, NUEE stated that it was not comfortable with his choice.

The NUEE said that there could not be affordability without availability of the commodity that Nnaji had earlier called for the take-off of the privatization process without stable power supply, saying such stand would spell doom for the country's social and economic development.