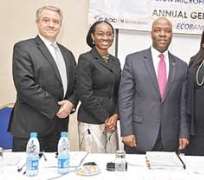 Recognising the need for the 'poor but economically active' group to be financially included, the Central Bank of Nigeria (CBN), in 2005, launched the Microfinance Policy Framework, which empowered licensed microfinance banks (MFBs) to cater for the financial needs of those in this group.

According to the Microfinance Policy Framework, 'in order to promote the development of the sub-sector and provide for the wholesale funding requirements of microfinance banks, a Micro Finance Sector Development Fund shall be set up. The Fund shall provide necessary support for the development of the sub-sector in terms of refinancing facility, capacity building, and other promotional activities. The Fund would be sourced from governments, soft facilities from the international development financing institutions, as well as multilateral and bilateral development Institutions.'

But the delayed take-off of the Microfinance Development Fund and the inability of MFBs to access public funds are clogs in the wheels of delivering financial services to the unbanked as most MFBs struggle with liquidity challenges.

But MFB operators say they need more viable sources of funding open to them and are seeking access to public funds which they believe would reduce cost of doing funds and crash the high interest rates prevalent in the sector.

'Cheap funds would crash the high interest rates and things would be better. Though I understand the fears of the regulators, but I am optimistic that we would not mismanage the funds.,' he said.

'Access to public fund would take care of the high interest rate which would move the sector forward. On our own, we have set up the intervention fund committee that will come up with criteria to access this fund.'

For a Managing Director, who pleaded anonymity, 'access to public fund is fundamental to the growth of the sector as savings mobilisation and deposits are not enough to sustain us. We need more options available to us.'

Another Managing Director, who spoke off records, said the ability of MFB operators to access public funds would go a long way in the sector's ability to eradicate poverty and increase financial inclusion.

Though the capital requirements for the two categories of MFBs are N1 billion for state banks and N20 million for unit banks, but considering the huge number of the unbanked and underbanked population in Nigeria, MFBs definitely require huge amount of funds to effectively carry out intermediation processes.

Pointing out that though MFBs are not expected to operate on public funds but deposit mobilisation and shareholders' fund, the Managing Director of NPF MFB, Mr. Mohammed Hassan, said access to public fund would help boost their operations.

For the Chairman of Umuchinemere Pro-credit Microfinance Bank, Monsignor Ike, MFBs must have enough equity of the promoters of the banks to take public funds otherwise they would use depositor's funds to settle bank's business, which is wrong and unacceptable

Though MFBs are not immune to funding problems that stem from low capital base, inordinate fixed assets acquisition, inability to mobilise deposits and questionable governance and management arrangements, it behoves on all the stakeholders - government, bankers, regulators and key decision makers - to realise the importance of financial inclusion which can be achieved only by a robust and financially equipped microfinance sector.

Microfinance bank operators have urged the CBN to release the N54 billion, Microfinance Development Fund meant to revive the sub-sector.

Some of the operators said this in separate interviews in Lagos that the sub-sector had never been given serious attention like other sectors of the economy. Mr Olufemi Babajide, Chairman of Lagos Chapter of National Association of Microfinance Banks (NAMB), reminded the Federal Government that the microfinance sector had vital roles in the industrial development of the country.

'Before the sanitisation exercise carried out by CBN, we felt the sub-sector was not attended to because of fake practitioners and maladministration in the sub-sector. But the subsector had been sanitised since September 2010, yet the fund is yet to be released to aid the subsector,' he said  Babajide suggested that the apex body should also set up a debt management company to manage the N10 billion bad debts in the microfinance banks. Mrs Clara Oloniyi, Managing Director of Infinity Microfinance Bank, said she did not know why the Federal Government had not injected funds into microfinance banks as it did to other sectors.

She said that funds had been released to revive the aviation, commercial banks and small and medium enterprises while microfinance banks that deal with the active poor were not aided.

'We are not happy when almost every sector have received bailout fund while our own sub-sector is left out. Last week, the governor of CBN still announced N250 billion for the aviation industry,' she said

Mr Emeka Ile, a financial specialist and team leader in Micro, Small and Medium Enterprise Project (MSME) Nigeria, said that the apex body should urgently release the fund to the sector. According to Ile, the delay in releasing the fund is creating the impression that the Federal Government is not committed to the sub-sector.

He, however, urged the operators to embark on image laundering to boost the confidence of Nigerians in microfinance banks.