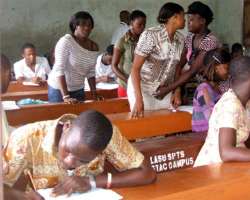 ABUJA - The Joint Admission and Matriculation Board, JAMB, has disclosed that a total of 2, 892 candidates scored 300 marks and above in its 2011 Unified Tertiary Matriculation Examination, UTME, conducted nationwide last week Saturday.

Besides, a total of 1,493,604 candidates who sat for the UTME examination are seeking for admission into the 500, 000 available spaces in the nation's tertiary institutions.

Out of this, the JAMB according him, is currently investigating the results of 7, 504 candidates, from some centres which he said are suspicious, and so the results must undergo further screening because of the unusual performances recorded by candidates from those centre.

He stated further that a total of 15, 160, representing 1.014 % of candidates, who participated in the examination were involved in exam malpractices.

On the issue of invalid and incomplete results that characterized the conducted of the exercise last year, Prof. Ojerinde announced a remarkable reduction from 82,000 cases in 2010 to 28, 069 in this 2011 exercise.

According to him, 'this figure, 28,069, although is a remarkable reduction in the previous one. It still remains high. In the years ahead, we will further bring down the figure drastically. Our target is to totally eliminate this phenomenon by drumming it to our examiners to do checks on candidates during the examinations.'

While a  total of 200 visually impaired candidates sat for the exams, 197 prisoners from mainly Kaduna State and Ikoyi Prison in Lagos State sat for the 2011 UTME exams. Imo State has highest number of applicants in the exams as the Federal Capital Territory, FCT, got the least applicant.

Ojerinde who said the results were posted on-line by 12.00 pm (today)Friday, said, the results are on the internet, as I am speaking with you. He advised that, 'candidates do not need to buy any scratch card, but can utilize the scratch card earlier used during registration for the exam.

Note: You can access JAMB's webiste on the link below.