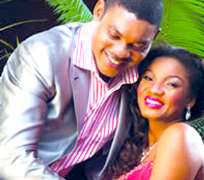 Some months back, news broke that the marriage of talented actress Omotola Jalade is under threat following a butt-grabbing incident by her escort at the 2011 Grammy Awards in Los Angeles.

In a phone chat with Captain Ekehinde by Ekerete Udoh in NewYork, Omotola's husband he responded to the rumour.

I am very proud of my wife's accomplishments and I join other well wishers and millions of her fans to toast her success. I'm a little surprised that instead of Nigerians celebrating her appearance at the Grammys and her, being the first Nollywood star to walk the red carpet; they are busy spreading tales and rumors that do not exist.

Truth be told, I was not angry with my wife when I saw the picture. Why should I be? I know who I married, how self-respecting she is and also the nature of her industry. She is an actress for God's sake, and it is not out of place for actresses to appear in scenes that may look a little out of place for a married person.

The key thing is that my wife respects her marital status, and in our 15 year marriage, she has been the best woman any man could aspire to have. In spite of her stardom, at home, she is my wife. She cooks for me, takes care of the home and above all, is a great mother to our lovely children.

I sincerely would implore her fans not to buy into rumors and speculations about her marital life, because I, the husband the one that is lucky to have her as my wife is so proud of her and I continue to thank God for bringing her into my life. I could never have asked for a better wife than her” Mr. Ekeinde a commercial airline pilot had concluded.