THE MADNESS OF THE NIGERIAN ARMY 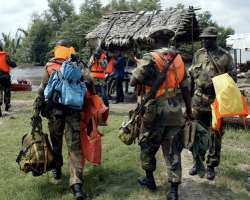 Last week, two soldiers from the Ninth Brigade Command invaded Rochester Hotels in Festac, Lagos and held staffers and guests hostage. They attempted to burn the hotel after they had been invited by a female staffer who had been suspended after a major ethics violation. She was unhappy with the punishment and demanded her wages. When the hotel offered her 1,500 naira after deducting the cost of damages it incurred as a result of her actions, she stormed out and came back with the soldiers who went ballistic and randomly attacked people on the premises with daggers, whips and an assortment of dangerous weapons. It took the intervention of a team of policemen led by Usman Ndamabo, the Divisional Police Officer of the FESTAC area to overpower one of the soldiers and avert a major tragedy.

Last Wednesday, I watched in amazement as a group of junior army officers pummelled a defenceless bus driver in broad daylight. The soldiers were riding in a nondescript van and had attempted a reckless overtaking of the commercial bus from the left. The driver saw them a little late and swerved sharply to avoid them. His slow reflexes cost him dearly. Apparently incensed by his inability to recognise an army vehicle, the soldiers threw open their doors and jumped out like crazed combatants. They dragged him out of the bus and gave him the beating of his life while a superior officer decked in fatigues watched impassively. One of them, who had yellowed teeth and the rheumy eyes of a drunk, tried to damage the poor driver's testicles with his shiny boots as the driver lay writhing on the floor.

After a few minutes, the soldiers were joined by another officer who had come across the scene and felt entitled to a share of the spoils. He gave the driver several kicks and warned him about the consequences of obstructing the path of army officers. When the soldiers finally got tired of kicking the immobile driver, they jumped into their van and sped off with the crazy drunk one waving his hands out of the passenger's window.

those that live in the chaotic city of Lagos, such sights are common. A few weeks ago, angry soldiers went on a killing spree and murdered several policemen after one of their own had been shot in a confrontation with a policeman. The soldier had been illegally escorting contraband goods and had tried to bully the policeman into letting him through a checkpoint. The altercation degenerated into violence and the soldier was fatally shot. When the news reached the barracks, his comrades went into the street and started killing all the policemen they could find. The scary part was that the officer in charge of the barracks said he had given the soldiers express orders not to retaliate and yet they defied him. That singular action suggests that the junior cadres are a ticking time bomb, a keg of gunpowder waiting to explode.

The truth is that our soldiers have become an urban nuisance, a group of slovenly mad dogs whose bosses can no longer control them. They have become private contractors who are employed to collect debts, escort transporters of contraband goods, protect prostitutes and take revenge on enemies. When they are not in terror mode, they run private businesses even though they are on the state's payroll. The Nigerian state is partly to blame for this. After the Biafran War, the top brass basically decided to stop recruiting qualified applicants. The Northern military establishment also decided to rig the mode of entry in such a way that Southerners and idealistic applicants were stopped from becoming soldiers. Over the years, as this policy was reinforced, the army became the home of psychopathic, illiterate imbeciles whose only reason for joining the military was to bully fellow citizens.

President Jonathan and General Azubuike Ihejirika, the colourless Igbo General he appointed as a political gesture to the South-East, must do something about Nigeria's breed of crazy soldiers before a major fiasco embarrasses them both. Our soldiers must understand that they are not above the law and that a culture of impunity is simply not acceptable. Surely, those two army officers from the Ninth Brigade can't blame the Rochester rampage on "unknown soldiers".

Chubi Eze is the Deputy Editor of The Lagos Times. [email protected]