ACN: Engagement, Not Use Of Force, Will End Boko Haram Violence 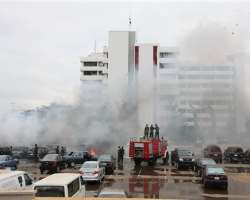 ABUJA, June 19, (THEWILL) - The Action Congress of Nigeria (ACN) has said the authorities should urgently engage those behind the worsening Boko Haram-led violence in dialogue, rather than place emphasis on the use of force, as a way of ending the violence.

In a statement issued in Lagos on Sunday by its National Publicity Secretary, Alhaji Lai Mohammed, the party also urged President Goodluck Jonathan to take the lead in engaging the Boko Haram sect, just like the late President Umaru Yar'Adua took charge of the amnesty programme for the Niger Delta militants, instead of leaving it to the Borno State Governor.

It also advised the police to talk less and show more tact in dealing with the issue, saying it took only days after the Inspector-General of Police Hafiz Ringim boasted, that the days of the sect are numbered, for the sect to take the battle to the IGP's doorsteps with the first-ever suicide bombing in Nigeria's history.

The party urged the government not to be discouraged by the near impossible conditions for dialogue that have been reeled out by Boko Haram sect, saying dialogue will pay off in the end if those involved can stay the course and surmount the obstacles.

''Our stand is based on the fact that Boko Haram is a product of politics gone awry, as the former Borno state governor allegedly used the sect to further his political career only to dump it unceremoniously. The cold-blooded killing of its leader by the police was the last straw. This is just like how some governors in the Niger Delta allegedly helped to create the monster of militancy by arming youths for political ends. Thankfully, that militancy has now been largely curtailed through a political solution,'' ACN said.

The party said Boko Haram has now evolved into a monster because of the dangerous mix of politics, religion, economy and international terrorism (alleged Al-Qaeda connection).

''Because of this dangerous mix, this monster cannot be subdued by force. If it were so easy, there would have been no dialogue with the IRA after years of military campaign against it. In any case, Nigeria currently lacks the capacity to use force to crush the Boko Haram sect. How many car parks, hotels or eateries and drinking joints can the police man? It is apparent that a sect that has claimed responsibility for bombings at military barracks as well as the headquarters of the police cannot be intimidated by six APCs, which the police said they have moved to Borno state.

''The authorities should also remember that a suicide bomber is an end-gamer who fears nothing, whether it is APCs or military tanks. And a man who has no value for his own life obviously places no premium on anyone's life. To worsen matters, the pervasive poverty in the country today, plus the evolving religious fanaticism, is such that there is large pool of willing recruits for suicide bombing. The bad economy has created many Boko Harams.

''Since long years of bad governance have left millions of citizens destitute and hopeless, some are willing to wager their lives for the Utopian life-after, the eternal peace in heaven, being promised their followers by some clerics. In the reasoning of these end-gamers, why not look elsewhere for the better life that has eluded them in this part of the divide?'' it said.

ACN warned that unless the government acts fast, the current state of insecurity can only harm the country's image and ruin its economy, as no investors will be willing to come to a country where he or she can be blown up by suicide bombers.

''No foreign investor will wait for a travel advisory from his/her government before deciding not to visit a country where security is not guaranteed, where a drink in a pub can fetch one a bomb. This is why all stakeholders must be involved, as we advised in an earlier statement, in the efforts to resolve this Boko Haram crisis. Let the process begin today!'' the party said.