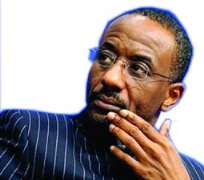 Two years is a whole lot of time: enough to grow ideas and plans to magnificent importance. In leadership and management, such period had been used to make expressions bordering on efficiency and capacity. It is a period good enough to build and consolidate on any strategic development programme. Any working plan that does not mature and begin to yield fruits within that period is ill-conceived, poorly implemented. It is really a long-term period and it falls into the length of time economists think should be enough for any well conceived idea to begin to yield good results.

Sanusi Lamido
That is why Nigerians have been worried with the situations with Nigeria's renewed banking sector reform which is running into a brick wall. The facts emerging from the foregoing include the explanations that the reforms as conceived by Mallam Lamido Sanusi's Central Bank of Nigeria (CBN) did not go through some mandatory crucibles and did not pass the critical tests or answered the relevant questions that could, otherwise, turn a half-baked idea to good. Such decisions whose contents have been subjects of raging judicial and economic interpretations have given credence to several false starts that inundated the entire process.

The agenda of the apex bank in the ensuing banking sector reforms have not excited many, as the outcome of each decision had always been known before its take-off based on the haste that had enveloped the entire process right from inception. Two years down the line, the entire exercise earlier taunted as the bridge between heath and prosperity for our banks and the economy has continued to be a nightmare of some sort, with the additional burdens of dragging the entire economy to the brinks of collapse.

Ever since, the CBN governor has continued to churn out guidelines, orders and policies that tend to contradict some of the apex bank's earlier positions on banking issues, thereby creating a whole lot of regulatory distortions in the system. This has drastically impacted harshly on CBN's role in building confidence in the system. Top stakeholders in the country's economy such as Ola Vincent, former Governor of the CBN and Mazi Sam Ohuabunwa, President of Nigerian Economic Summit Group (NESG) have continued to harp on the various decisions on the banking industry that tend to distort the economy to some great dimensions.

They have continued to remark that the office of Governor of the apex bank must be seen to be a serious policy organ so that its reputation remains largely intact. The various conflicts of confidence that have arisen also tend to paint a picture of a failing confidence for the exalted office.

Developments in the last few weeks have thrown up new fears in the industry as the apex bank has started to sing a new song on its liquidation plans even as it was originally insisting that no bank will again fail in the country. The release of operating licences for 17 banks out of the existing 24 was an indication that it has lost focus and may have had plans from the on-set to liquidate the banks. This development is currently causing some heavy runs on the troubled banks as they are now being perceived by customers as having the capacity to be technically insolvent. Heavy withdrawals have continued to trail this new approach by the CBN with the dire consequence of heavy financial losses to depositors and highly reduced intermediation activities in the economy. Since the mix-up , banking halls of the eight ill-fated banks have been shadows of themselves as very reduced activities are being continuously experienced even as the banks are still structurally keen and positioned to continue serving their numerous customers.

One very disturbing signal in the entire development is the September 31 liquidation deadline which the apex bank has announced in a very unprofessional way, prompting new beliefs that the CBN governor's approach to the problems he created in the industry two years ago have really overwhelmed the apex bank governor and his assistants.

His roller-coaster approach has since the last 24 months found no real answer to the miasma he claimed he saw which have thrown the financial sector in utter disarray. Now, the economy may further slip into a precarious state of reduced activities as investors are closely watching developments in the sector with very high resentments. Many Nigerians have continued to frown at CBN's approaches in the last two years which have centred more on issuing of orders and guidelines without any corresponding improvement on the state of the industry or the entire economy.

It can easily be seen that the cost of the entire gamut has been a colossal waste to the economy as much of the N620 billion injected into the banks, which was uncalled for in the first instance, has been frittered away by the interim management of the banks which have not attracted any new transaction of note in the last two years. This is aside from the several billions that have been spent on litigations and allied services. The EFCC has spent some fortunes on all sorts of logistics all the way while the accused bank officials have also spent a lot of funds , most of which they claimed have been borrowed since most of them have had their sources of funds frozen.

All these wastages could have constituted a good volume of investible capital into the economy if CBN had approached this development from a perspective that would have abhorred unnecessary fritting away of resources. Head or tail, the economy has been the greatest loser as all the efforts since the last two years have not added much value to the system. The plummeting of stock prices ever since is directly related to this development as banking stocks quoted in the market still constitute the greatest volume of all capital market activities.

The fact still remains that the action of the apex bank in the last two years may be held responsible for the very low pace of growth in the economy as against the perceived ideas of the CBN that the intervention or the so-called-intervention would open up the market, instill confidence and stabilise the financial sector. The way things are going now, the financial market is sitting on the precipice which also means that if nothing positive was done to stem this tide, the anticipated dividends of the new political administration will be lost, as all indicators show.

Government and its various arms such as the legislature may have failed in their duties as they have looked the other side as the CBN has continued to apply some methods that should be stopped. The various judicial processes and the many pronouncements run strictly counter to understandable norms.

Some of the deliberate actions that have undermined the recovery of these banks such as the continued retention of non-performing interim officials and the uncontrolled pronouncement of the CBN governor are issues that should have been curtailed from inception. It must be noted that the source of CBN's power to act arbitrarily still remains highly questionable even as the government has continued to keep mute on such developments that are capable of rubbishing all growth efforts since the last two years.

Right now, there are clear indications that the real record of vital economic indicators like the GDP, inflation, unemployment and costs of funds can no longer be ascertained. The implication is that the country is currently running a very blind economy which does not give the clear picture of the status quo ante. This is not good for a nation that runs a mono-economy, even as other smaller economies within the emerging markets are repositioning their banks in manners that have been conscious of the fall-outs of the last global financial meltdown.

From the way the CBN is going, between now and September, the Nigerian financial sector will be facing the toughest survival challenges and this does not favour our expectations for an improved power sector, new educational and upgraded infrastructure conditions. The reason is that the banks which remain the buffer of any consolidated development have been seriously fragmented and there is no sign that somebody is ready to throw a hoot.

The failure of the various acquisition efforts in making any appreciable head way after huge sums of money have been paid to all manners of foreign and local consultants and advisors is sure indication of the very wrong footing the CBN had applied in this exercise. In all intents and purposes, the actions and inactions of the CBN in the last two years have seriously been a boomerang to the economy, and it shows!