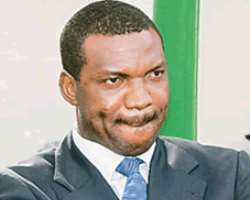 National Under-23 coach, Austin Eguavoen, has said it was not an easy task for his wards to score three unreplied goals against the dreaded Tanzania team in Olympic qualifier in Benin yesterday.

' It was not an easy game, but we should have won by, at least, five goals to one if only our strikers were able to convert the chances that came our way. I must commend my boys for putting up a good show. As you all witnessed, the boys were always rushing to the touch line to have a change of footwears because the pitch was very hot, but with all that, they brought forth the desired result, said Eguavoen after the game.

The Dream Team V will now switch attention to this weekend's first leg All Africa games qualifier against Ghana. The Eguavoen-tutored side started off on a convincing note as Warri Wolves' striker, Ekigho Ehiosun, headed home a perfect cross from captain Lukman Haruna in the 3rd minute.

All efforts by the Dream Team to make it two in the first half hit the brick wall of the Vijana's defence led by its inspirational goal keeper, Self Juma. After several missed chances upon resumption of the second half, pressure from Ahmed Musa, Ehiosun and Nnamdi Oduamadi of the Dream team V paid off in the 55th minute as Ganiyu Oseni slotted in a timedcross from Ekigho Ehiosun.