I am married but another man wants me for N5m 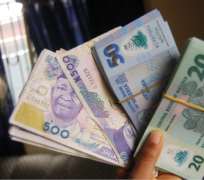 Lola was beginning to get exasperated with Gbenga's incessant talk about wanting to start a relationship with her. No matter how many times she told him how disinterested she was, Gbenga refused to back out. As far as she was concerned, there was nothing appealing to her about Gbenga, who was too full of himself. She wondered for the umpteenth time why any sane girl on campus would agree to a relationship with Gbenga whose ego was the size of Olumo rock.

But Gbenga was not going to take no for an answer. His confidence came in large doses; he rarely ever got his requests turned down –– not when it had to do with intimacy with the opposite sex. In most cases, he didn't have to do any chasing, his physical appearance and deep pocket spoke for him in no small measure. So, it was an affront to him that Lola who didn't look half as good as the 'sex bombs' that swarmed round him would repeatedly turn down his request for a relationship, not even after he had put on his irresistible boyish charm.

Compared to Gbenga, Dayo was more level headed and had sincerity of purpose. Just before their final exams, she finally agreed to give Dayo a chance –– a development Gbenga didn't find funny at all. But he managed to take the disappointment in his stride.

They soon graduated from school and, before long, each found their own level. Gbenga got absorbed into one of his father's companies and after several months of job search, Dayo also got a job in an insurance brokerage firm. Lola wasn't as lucky, as it took her time to get a job but she eventually did –– a teaching job in a highbrow school. Three years after graduation, Dayo and Lola settled down to marital life and immediately began the business of child bearing. In five years, they had all of their three children and concentrated on raising them.

Then one day, the nightmare that would threaten to ruin their marriage began.

Dayo complained of acute pain in his joints while at work and soon after, his eyes began to reel and then he slumped. He was rushed to the firm's clinic where he was put on bed rest and got referred to a teaching hospital for a comprehensive test to properly corroborate their own findings. It turned out that Dayo had kidney problems and needed to be placed on dialysis before getting a replacement for the malfunctioning kidney.

This sounded like news from outer space to them. Their entire savings couldn't pay for the required number of dialysis needed, including the cost of a kidney transplant. They soon scaled the first hurdle when a series of test revealed that his wife could comfortably donate one of her kidneys, which matched his. The impossibility of raising almost N3m to make the trip to India for the transplant stared them in the face; and the longer they delayed, the more Dayo's health deteriorated.

Lola did everything within her power to raise the money, but it was beginning to look like an uphill task. Her school's alumni had managed to raise about N500,000 for them, which was barely enough. Then one day, Gbenga, who was now married with children, paid the family a visit and offered to help. He would gladly give them N5m to cover their expenses and even have enough to rebuild their lives on the condition that Lola, who had long eluded him, grace his bed for one whole week.

As soon as he dropped the bombshell, he stood up and left, but not without leaving his call card on a table. Dayo and Lola could not recover from the shock of what they had just heard. They could not respond, because it sounded ridiculous to even consider. After a few days of musing over the offer, by which time tempers had simmered down considerably and Dayo's health had really nosedived, he told Lola to take up the offer.

No man in his right senses would encourage his wife to engage in extra-marital affair. His case was peculiar and he didn't want to die. There were a lot of things he was yet to accomplish and he wanted to die a fulfilled man, not one cut down in his prime. He promised to continue loving Lola and to never allow the action come in the way of their happiness.

To say that Lola thought it incredulous for Dayo to suggest such a thing to her would be just putting it mildly. She couldn't, for the millions in the whole world, condescend so low to having anything to do with Gbenga. She was prepared to go cap in hand begging on the streets to raise the balance of the money, but not to be found on the same bed with Gbenga.

The die is now cast. Should Lola maintain her integrity and watch her husband die; or should she accept Gbenga's offer as prodded on by her husband?