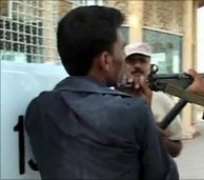 Sarfaraz Shah (left) was detained at gunpoint and then shot

Seven men, six of them soldiers, have appeared in a Pakistani anti-terrorism court in connection with the killing of an unarmed man in the city of Karachi.

The killing of Sarfaraz Shah was filmed by a TV cameraman and widely broadcast by Pakistani channels.

The soldiers belong to a paramilitary unit and are in jail awaiting formal charges. Pakistani prosecutors say they will pursue murder charges.

A security guard from the park where Mr Shah was killed is also in custody.

Police say they have completed their investigation into the incident and the case now rests with the prosecutors.

“We have been handed over the charges against the men by the police,” public prosecutor Arshad Iqbal Cheema told the BBC.

“We are examining them and will present them in court once we have been satisfied.”

'Begging for help'
The strongest piece of evidence is the video footage recorded by a cameraman for Awaz (The Voice) TV, a local Pakistani channel.

Police officials escorted the men into the court amid tight security. The accused had their faces covered to conceal their features.

Police officials say that they have asked for the men to be tried under Pakistan's anti-terror law, which also deals with especially horrendous crimes. They face a possible death penalty.

But public prosecutors say they still need to examine the evidence before asking for such a punishment.

Pakistan's government is under tremendous public pressure to punish the men. It is all part of a rising wave of anger against the country's security forces.

Many people are now calling for accountability in the face of instances of inefficiency and abuse of power.

The footage, which surfaced last week, showed Sarfaraz Shah, wearing a black T-shirt, being dragged by his hair in a public park by a man in plain clothes and pushed towards a group of Sindh Rangers who are in uniform and armed.

He pleads for his life as one of the Rangers points a gun at his neck and a little later a Ranger shoots him twice at close range, hitting him in the thigh. The young man is seen writhing on the ground, bleeding heavily and begging for help.

The paramilitaries did nothing to help him. He died from his injuries.

The Rangers say he was caught trying to rob someone. His family denies this.

Police said they recovered a fake pistol, which Mr Shah was carrying, as well as the two bullets which killed him. They have also interviewed 17 witnesses.

The video prompted further widespread criticism of the Pakistani security establishment, which is already under fire for the recent killing of a journalist, Saleem Shahzad.

Journalists, politicians and rights activists have accused the army's intelligence service, the ISI, of the murder, a charge which the ISI denies