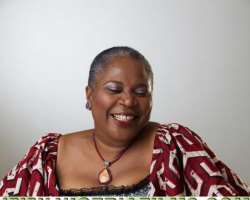 Meanwhile, in our publication few months ago, one of the brains behind the Omenuko project , Mr. Dickson Iroegbu went out of his way to explain the circumstances that surrounded the failed project. According to him, the project failed because Onyeka decided to receive cheques meant for the project in her name. But reacting to Iroegbu's allegation, Onyeka on her own explained how she brought Dickson into the picture, declaring that the controversial film director did not invest a penny in the project. We however re-issue that controversial interview to put the record straight.

The Omenako'project was my brainchild. I just got Dickson Iroegbu to assist me. The problemwith Dickson is that he was feeling insecure.

Whenever he reads the articles published in the national dailies about the project, he becomes uncomfortable and jittery because he was not getting the press attention. I advised him to acquaint himself with the write-ups so as to equip himself in case the press would come to interview him. But all he wanted was publicity.

There were times he'd call me on phone, and start shouting and threatening me – which wasn't right. When I felt that my life wasn't safe anymore, I invited the police who got him arrested and took him to the station. But before he was released, he was made to write an apology letter, a copy of which is with the police.

In fact, the money he said I didn't give to him doesn't belong to him. He doesn't own a penny in the project. All the money that was spent on the project so far belonged to me. We also employed the services of an advert company called, Abstract, owned by Charles Otudo. Abstract is in charge of raising funds for the project and I have all the papers of all the agencies we employed and how much was given to them.

The project was all about the ego tripping attitude of my Adanne, Onyeka Onwenu as I call her. She doesn't know the difference between being a star and a content provider.

We got into equal partnership agreement, and when eventually we commenced the project, she didn't think it was necessary to share ideas with the person with whom she is going to work with.

But when she started receiving cheques in her name, I said to her, 'Madam this is not what we agreed on'. Challenging her, she got me arrested. I have not disclosed this before to anybody.

I was in my house on that fateful day, when a letter from the Lagos State Commissioner of Police office was delivered to me, alleging that I was threatening her life. I reported at the police station, and narrated my side of the story. That's how the project of $100 million went underground.

I'm sure, Onyeka is still running the project, but I'm waiting till she's done with it, then, I can take up the issue with her. Omenuko is a common story among the Igbo nation.

We met with the descendant of Omenuko who endorsed the project officially and made some facts available to us. Governor Ohakim Ikedi released the huge sum of N10million for the project to be carried out, which was the first challenge I had with her.

Onyeka got the cheque in her name, and how she spent the money is what I cannot explain.