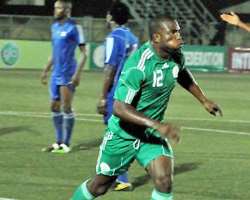 Top players like Ahmed Musa, Rabiu Ibrahim and team captain Odion Ighalo are major doubts for the make or mar game billed for the Samuel Ogbemudia stadium in Benin City. This development has left the former Eagles  defender with limited options, but he is hopeful that Ehiosun will be at his goal scoring best against Tanzania.

The 'Olympic Eagles' need a 2-0 win to cancel out the ambitious Tanzania that have a 1-0 advantage. Eguaveon stated that the team is prepared for the tough task ahead.

Ehiosun: A fruitful debut
'We understand the importance of this return leg and we are leaving nothing to chance. And we want to put in all available resources at our disposal to ensure that we get the ticket for the final eight tournament.

' I spoke with Ahmed and he said he would be here so let's wait for him to come. Like you already know Anthony Ujah, Nosa Igiebor and Odion Igalo along side Rabiu Ibrahim are all ruled out so if Ahmed can make the game it would be a plus for us' declared Eguavoen.

He has called up strikers like Sone Aluko and Ganiyu Oseni with the hope of strengthening the attacking line up, even as he is counting on Ehiosun who has four goals to his credit in the team's campaigns.

'I am very happy for this invitation because a lot has been said about me dumping this team which is not true. I thank coach Eguavoen for still having confidence in me.

I wish I even had a jet I would have flown straight from Bayelsa to Benin immediately after our game' Ehiosun stated humorously on arrival to the team's camp.