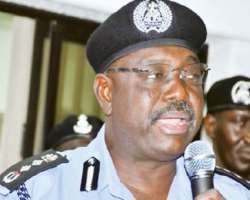 The most lawless institution of the government of Nigeria is the Nigeria Police. It is out of control. It maims and kills Igbo and other Biafrans with impunity. It runs an open roadside extortion program in Igboland-Biafraland without challenge, without mercy and without remorse. It forms the nexus of armed robbery (even President Obasanjo said so) and kidnap-for-ransom racketeering in the region. It destroys Igbo-Biafran property and livelihood with malicious deliberateness and calculated wickedness. It creates and maintains an environment which actively recruits criminals, fosters, supports and facilitates crime in Igboland-Biafraland. It will not take orders from Nigeria’s Presidency, who by Nigeria’s constitution is the ultimate head of the Nigeria Police: ask President Obasanjo. It will not take orders from its own Inspector General of Police (IGP): ask Hafiz Abubakar Ringim and his predecessors. The so-designated chief security officer of a State, the State Governor himself, has no say in the matter over what the Nigeria Police does in his State even though constitutionally he has the authority.

How can the Nigeria Police continue to get away with all this in Igboland-Biafraland? The reason is obvious. The pernicious actions of the Nigeria Police serve the purpose of Nigeria in so far as Nigeria’s policy of military and armed hostile occupation of Igbo-Biafraland, the repression, subjugation, suppression, humiliation and the annihilation of the entire Igbo-Biafra has remained operative, starting from 1966 and especially since the end of the Biafra-Nigeria war in 1970. Nigerians and their leaders have learned to look the other way as this malevolent practice is continually meted out against the Igbo-Biafrans who themselves have been made to accept it as the price they have to pay for daring to defend themselves against a remorseless Nigeria relentlessly intent on wiping them off the face of the planet in the first place, during the 1966 pogrom and the Biafra-Nigeria war.

Now, we ask the Nigeria Police:

What does it take to stop a convoy of unarmed civilian buses on a narrow Nigerian road? Just one police vehicle; at most, two, right? Would it take machine guns or rifles?

Why damage the buses also? Are they military vehicles threatening the police formations? Or, is this the typical Police hatred-driven hostility-attitude of “inflict the maximum damage possible” on hapless, helpless, unarmed Igbo-Biafrans?

What is wrong with people marking the anniversary of events that are important to them? Did May 30 1967 declaration of Biafra not happen? Next, the Nigeria Police would arrest Igbo-Biafrans marking the anniversary of May 29 1966, the official start of the bloody ethnic cleansing exercise directed against the Igbo and other then-Eastern Nigerians in Northern Nigeria, spreading to the rest of Nigeria later?

For that matter, does the Nigeria Police understand that today, the world will not tolerate the gratuitous injury, killing and arrest of unarmed civilians going about their business, even if such business is assembly? Does the Nigeria Police understand that, were the MASSOB members indeed going for a protest-march, they have the right to do so, especially since it is a peaceful demonstration, MASSOB being non-violent? These are rhetorical questions, indeed; the government of Nigeria does not need to be reminded of the answers—it knows very well—but it did not stop its Police nor order its Police to stand down.

For the record, the Nigeria Police has been arresting, imprisoning, torturing and killing MASSOB members since 1999. When compelled to charge its MASSOB victims to court after months of initial unlawful detention, the Nigeria Police has never won any conviction against any MASSOB member for Biafra actualization activism. In the notorious case of “the MASSOB-53” in early 2000’s, even the Attorney-General of Nigeria went on public media to accuse and charge arrested, detained and paraded MASSOB members with Treason and “intimidating [General] Obasanjo, the President of Nigeria.” But, in what was to become the norm, the government prosecutors repeatedly failed to present a case and pursue prosecution, only appearing in court to ask the judges to deny bail to the accused, repeatedly, which was done. This resulted in the unjustly accused being jailed for years, without a real trial. In the end, the cases would be dismissed by the courts; yet the prisoners would remain in jail, especially when they could not come up with enough money to bribe the Police and courts. Thus, maximum damage—physical, psychic, psychological and financial—was inflicted intentionally on the innocent Igbo-Biafran MASSOBians by the Nigeria Police and the government of Nigeria in all these cases.

Also for the record, no member of the Nigeria Police has ever been tried, convicted and or imprisoned for such unconscionable, criminal, lawless, malicious and inhumane targeted systematic destruction of the lives, livelihood and property of the MASSOB and Igbo-Biafrans. Nigeria Police gets away with the selective violation of the Igbo-Biafran all the time. Remember the unbelievably heinous murders of Igbo-Biafrans and their lady-friend by a Police department right there in Abuja, in the “APO-6” case?

Today, against world trend and opinion, the Nigeria Police is using unnecessary brutal and lethal force to deny Igbo-Biafrans their civil rights, and the government of Nigeria is not doing anything about that, never mind, against it. Therefore, it is left to the Igbo-Biafrans to exercise their right of Self Determination in order to take control of their own destiny, individual and collective life, from a pernicious state called Nigeria determined to annihilate them. On May 30 1967 we did this. Today, we have to return to it and re-emphasize our rights. It is not a matter or case of waging war or peace with Nigeria about this. Rather, it is all about the inalienable right of a people, a moral right and Moral duty, a right recognized by the UN and the AU, and in the final analysis, a right to survival and human dignity of a people. A re-committal to sovereign Independent Biafra, applying the contemporary recognized principle of Self Determination, is our task of the day.