Anambra Gets Another Female Speaker 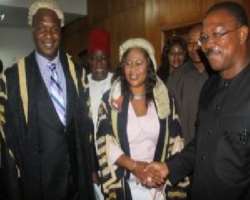 NEW SPEAKER OF THE ANAMBRA STATE HOUSE OF ASSEMBLY, HON MRS. CHINWE NWAEBILI IS CONGRATULATED BY ANAMBRA STATE GOVERNOR PETER OBI IN THE PRESENCE OF CLERK OF THE HOUSE AND APGA CHAIRMAN.
Listen to article

Nwaebili (APGA) who represents Ogbaru State Constituency was elected and sworn in Monday inside the chamber of the State Assembly in Awka.

The new Speaker is the second female to occupy the Office of Speaker in the state’s legislature. The first was Mrs. Eucharia Azodo, who was elected in 2003, but was impeached barely a month afterwards following her role in the abduction of then governor Chris Ngige.

Mr. Chukwudi Orizu representing Nnewi North was also elected and sworn in as the Deputy Speaker.

However, five members-elect from the Peoples Democratic Party (PDP) were left out of today’s inauguration and proclamation ceremony, where the State Governor Peter Obi was on hand to perform his part of the ceremony. A court directive to the Clerk of the House stalled their swearing in.