Nigerian To Be Executed In China Today 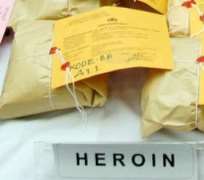 The executions and trials took place throughout the nation in recent days, Xinhua news agency reported, with six convicted traffickers executed in Beijing alone on Thursday.

June 26 marks the UN's International Day Against Drug Abuse and Illicit Trafficking, a date when China has traditionally executed and sentenced convicted drug traffickers to illustrate its resolve in fighting the scourge.

Among those sentenced to death was a Nigerian man identified by Xinhua as Osonwa Okey Noberts, who was convicted by a court in southern China's Guangdong province of trafficking nearly six kilograms (13.2 pounds) of heroin.

Other cases of international smuggling included a Chinese man convicted and sentenced to death in Beijing for trafficking 197 grams (7 ounces) of methamphetamine from North Korea, the China Daily reported.

Two ethnic Koreans were also being tried for smuggling the drug into China from the isolated nation, it added. Their exact citizenship was not given.

Meanwhile, police in China's westernmost region of Xinjiang this week destroyed six tonnes of heroin, opium and hemp smuggled in from Afghanistan and Pakistan and valued at 300 million yuan (44 million dollars), Xinhua said.

Courts across China handled more than 14,000 drug-related cases between January and May, up 12 percent from the same period last year, the report said, citing judicial authorities.

Nearly 6,400 people have been convicted of drug crimes and received sentences ranging from five years in jail to death over that period, it said.

"There is a growing trend toward making (illegal drugs) on the mainland instead of smuggling... from abroad," the China Daily quoted Zhang Jun, vice head of the Supreme People's Court as saying.

"There are more cases of smuggling and trading of chemical raw materials for drug production."

State media reports cited authorities saying "designer" drugs such as methamphetamine, ecstasy and ketamine were emerging as a new and dangerous segment of the drug market.

The drugs were gaining popularity among newly affluent young Chinese who viewed the use of such substances as a status symbol.