IS TAMBUWAL NEW FACE OF DEMOCRACY? 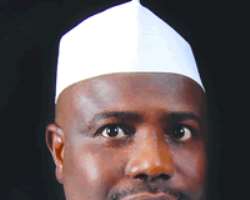 Tambuwal
For many, Aminu Waziri Tambuwal may easily be regarded as the new face of the nation's tottering democracy. The emergence of the North West legislator representing Tambuwal/Kebbe constituency of Sokoto State last week as the Speaker of the seventh House of Representatives has substantially changed the course of democracy in the country.

Even cynics are tempted to have a rethink that the nation's democracy is growing after what seemed like a coup d'etat where Tambuwal overwhelmed the favoured candidate of PDP in the lower House of the National Assembly.

In the tension-soaked election, 252 lawmakers cast their votes for Tambuwal to defeat Hon Mulikat Akande-Adeola, who secured 90 votes. The lawmaker and lawyer enjoyed the support of PDP and even opposition parties' members who overwhelmingly threw their weight behind him in the election that lasted for over three hours at the green chamber of the National Assembly. Akande-Adeola, from Oyo State, South-West, was the prefered candidate of the PDP leadership based on the ruling party's geo-political zoning formula. But the lawmakers ignored zoning and allowed democracy to prevail.

However, since the election, Tambuwal who is a graduate of Usman Dan Fodio University has become one man that means different things to people. To power brokers in his party, the PDP, including President Goodluck Jonathan, he is a rebel bent on rocking the boat. In the perception of leaders of the PDP, the decision of Tambuwal and his supporters to shun zoning was unacceptable. Even though he has apologized to the party which has also openly forgiven him, many caution that he has to continually watch his back.

For some people of the South West, the new Speaker has literally robbed them of their birthright as the ruling party had reserved the seat for one of their own. They see the election of Tambuwal as a betrayal of the existing gentleman agreement in the ruling party.

But what could be regarded as the height of the intrigues which characterized Tambuwal's election was the support he got from the South West members of the House especially those of the ACN. Many argue that the South West particularly rebelled against Adeola-Akande because she was never their choice in the first place.

In the South East, the 'rebellion' at the House of Representatives came as a good omen considering that a lawmaker from the extraction, Emeka Ihedioha emerged the deputy Speaker.

The mood is the same among politicians from the northern part of the country. To them, Tambuwal has proved the savvy of politicians of the region. But irrespective of the political divide which one belongs, majority of Nigerians believe that Tambuwal symbolizes freedom from the PDP cabal which has not allowed democracy to evolve naturally in the country. The development though comes with a lot of implications.

Face-off between the Executive and Legislature
Many argue that the House of Representatives is not likely to have the best of relationships with the Executive arm of government. The calculation is that having not supported the candidature of Tambuwal, President Jonathan may not be favourably disposed to work with him.

But in the estimation of critical observers, such a situation may not arise considering the danger in not cooperating with members of the lower House. Already, good reason has prevailed with the reconciliatory efforts by the National Working Committee (NWC) of the PDP. The committee has accepted apologies offered by the new Speaker and his deputy for violating the zoning formula of the party. On Wednesday, the decision- making organ of the PDP forgave the Speaker and his deputy even though it declared that it was not happy that Tambuwal emerged in defiance of the spirit of zoning. President Jonathan also congratulated Tambuwal for his election.

The President, however, said the preference of a candidate from the South-West geo-political zone as Speaker was to obey the part of the country's law, which advocates the principle of federal character.

Addressing journalists covering the United Nations (UN) before he left for Washington DC to meet President Barack Obama at the White House, Jonathan said he did not believe that the emergence of the new Speaker, which is against the wish of the PDP 'is a major issue.'

According to him, 'The Speaker will be their leader and we will look at it as a party to make sure that a section of the country does not feel marginalised. We also know that even the South-West that seems not to have any position as among the top six voted for the Speaker. If that is the wish of the South-West, maybe there are other positions in the House that would be given to them.'

However, those who understand the politics of the PDP advise that the new Speaker should tread softly and not be carried away by the clean bill of health he received from the ruling party's hierarchy.

Is zoning dead?
Many are patiently waiting to see how the PDP would manage its zoning formula as the South West has technically failed to benefit from the arrangement which has existed in the party since 1999.

But what is no more news is that the South-West and the North-East have become the only regions with no major national political position. The President is from South-South while the Vice President is of the North-West extraction.

Also, the Senate President is from North-Central, Deputy Senate President, the South-East and Speaker, House of Representatives from North-West. Surprisingly, the South East which is easily regarded as the underdog in the nation's political equation has benefited from the situation as the zone clinched the seat of the Deputy Speaker.

While the North East may have some consolation in the monolithic political culture of the northern zone which still has the Vice Presidential seat and other positions, the argument is that the South West lost the chance when it allowed the Action Congress of Nigeria (ACN) to sweep the polls in the last governorship election in the zone. The belief in many quarters is that with only six PDP members of the South West stock in the House of Representatives, it was not surprising that Tambuwal who is of a different geo-political zone emerged.

But the PDP, in a statement signed by its National Secretary, Alhaji Abubakar Baraje, said zoning is still an integral part of its constitution. Baraje said the NWC was consulting other organs of the party to re-assess the situation and would soon 'come up with an appropriate policy in due course'. The statement reads: 'The National Working Committee of the Peoples Democratic Party (PDP) notes with great concern the unfolding developments in the House of Representatives, especially the outcome of the election of principal officers on Monday, June 6, 2011.

'While the Party believes in, and indeed encourages the exercise of freedom of choice for all Nigerians, including members of the National Assembly, it is important to reiterate that the principle of zoning is still an integral part of the PDP Constitution. 'The idea of zoning is a well thought-out philosophy for national stability and integration. It is the only guarantee that every segment of Nigeria enjoys a sense of belonging by being represented in all the decision making organs of the government of Nigeria.

'Consequently, prior to the election of principal officers that took place in the Senate and the House of Representatives on June 6, the NWC in collaboration with other decision making bodies of our party, made spirited efforts to build a consensus around the zoning formula. 'The NWC is currently consulting other organs of the party to re-assess the entire scenario and will come up with an appropriate policy in due

course.'
Implication for democracy
The election of Tambuwal has laid a foundation for the independence of the judiciary. As it appears, Nigeria may have kissed the era of imposing candidates on the House's leadership goodbye. But another school of thought argues the new Speaker should not have been allowed to contest the election in the first place because he was being investigated by the Economic and Financial Crimes Commission (EFCC). Tambuwal is under investigation by the EFCC for alleged N100bn fraud and he was alleged to be a member of the committee which illegally increased the allowances of the legislators.

According to the EFCC, Bankole, Tambuwal's predecessor whose tenure as presiding officer of the House ended on Friday June 3 was last Sunday arrested over several alleged financial misdeeds. Among the allegations are his taking a N10 billion personal bank loan, using the House of Representatives' account as collateral, misappropriation of N9 billion naira and creaming off a handsome take from a N2.3 billion naira scheme by which 380 units of Peugeot 407 cars were purchased for House members in 2008.