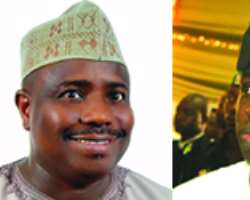 For the second time, members of the Peoples Democratic Party (PDP) in the House of Representatives defied the directive of the party on who to elect as Speaker of the House.

The first time was after the removal of Mrs. Olubunmi Etteh as Speaker. To fill the vacancy, the party directed its members that constituted the majority in the House to vote for a candidate from Oyo State. Another group within the House comprising PDP members sponsored Dimeji Bankole from Ogun State. The two states are in the Southwest. Bankole defeated the candidate of the party by a very wide margin.

Last week, it was time to elect another set of leaders following the expiration of the tenure of the leadership of Bankole. The party zoned all the major elective offices and the position of Speaker was zoned to the South West. Again, the House that has PDP members in majority voted another candidate who is also of the PDP but from a zone the position was not allotted.

After this year's elections, the PDP had more than two third in the House comprising 360 members.

The party has 202 lawmakers as against 158 lawmakers elected on the platform of other political parties. Out of the 351 votes cast at the election on the floor of the House, eight votes were voided and one member abstained in the open secret ballot adopted for the election. Although the PDP zoned the position to the South West, Hon. Aminu Waziri Tambuwal representing Kebbe/Tambuwal Federal Constituency in Sokoto State, North West zone of the country defeated the party's choice candidate, Mrs. Mulikat Adeola-Akande by 252 to 90 votes.

In 1999, 2003 and 2007 when the House elected their leaders, the party gave directives on whom to elect as Speaker. The drumbeat changed after Mrs. Etteh was toppled.

Why Tambuwal won
The party had immediately after the 2011 election announced the zoning of important offices. After the South South had taken the presidential slot, Vice President to the North East, Senate President, North Central and Speaker of the House, South West.

In the first place, there is discontent within the party. The outcome of the zoning of the presidency, which finally went to the South South is believed to be a deliberate attempt to slight the north. Politicians from the North agued before the party primaries that it was the right of the North to produce the presidential candidate of the party in order to complete the tenure of the late Umar Musa Yar'Adua.

Yara'Adua succeeded Olusegun Obasanjo who ruled from 1999 to 2007. With the presentation of Goodluck Jonathan who was Yar'Adua's deputy as presidential candidate of the party, leading politicians in the North believe zoning in the PDP is dead. No doubt, Tambuwal was encouraged to contest for the position by leaders that felt aggrieved about the zoning policy of the party.

Former military leader, General Ibrahim Babangida who took a shot at the presidential primaries of the party before he stepped down for Atiku Abubakar, the candidate of the Northern Political Leaders Forum (NPLF), was happy with the outcome of the election in the House. In a statement he issued this week, Babangida described the outcome of the election as 'bold and courageous step taken by the members of the House which shows independence.' He also described it as a break from the culture of impunity and executive interference in the internal operations of the House.

A national officer of the party, who pleaded anonymity, was quoted as saying: 'What happened is still a part of reaction to what happened in the case of the presidency. Some people's interest is to say ok, if you are not respecting zoning, we too will not respect zoning.'

Secondly, in the South West to which the position of Speaker was zoned, PDP performed poorly at the elections. The party won only one senate position and five House of Representatives seats. The rival Action Congress of Nigeria (ACN) won convincingly in the zone. The feeling of many was that the zone that won elections for the party should be compensated. Consequently, South East that had the position of the Secretary to the Government of the Federation (SGF) zoned to it wanted the position of Speaker or the Senate Presidency. When members of the party decided to rebel against the party and Tambuwal indicated his interest to contest the position, the party could do little to effectively force members of the House to kowtow to the party's position. Even though powerful party leaders, led by the acting national chairman, Alhaji Bello Mohammed met three times with PDP members in the House, there was no change of position by the legislators.

Besides, the South West to which the position was zoned was embroiled in controversy over whom to present between Ajibola Muraina and Mulikat Adeola-Akande. Muraina was seen as candidate of Obasanjo because the South West leaders met in his country home in Abeokuta to announce Muraina as the candidate of the party. Swiftly, other leaders within the party in the South West sponsored Mulikat. By the time the presidency waded into the matter and through the influence of the First Lady, Patience Jonathan who insisted a woman should be the speaker, the groups settled for Mulikat. But it was too late. Instead of Mulikat and the South West leaders reaching House members in other zones, they relied on the party to compel members of the House to vote for the candidate of the party.

On the other hand, Tambuwal was in touch with all elected members, both old and new. He went round all the zones in the country to meet directly with members of the House. Many members of the House complained that the candidate of the party did not make any such effort.

'You know the alternative the opposition had was to vote for the woman (Mulikat) as Speaker. That would empower our rivals in the South West. Do you think it is politically wise to empower your rival so he can have the strength to fight you?'

The Bankole connection
Members of the House linked the arrest of former Speaker Dimeji Bankole by the EFCC last Sunday to the election of the next Speaker last Monday. Even though Bankole promised to honour the invitation of the commission on Monday, the EFCC moved against him late Sunday night.

Sources said Bankole is one of the supporters of Tambuwal. He worked with Bankole as a principal officer of the House. Sources said Bankole wanted to be part of the election of the Speaker and there were roles he was supposed to play to ensure the success of Tambuwal. The PDP hierarchy that had employed all tricks in the books to sway the legislators was believed to have had a hand in the arrest of Bankole. If the party candidate (Mulikat) must win the election, Bankole must not be allowed to be at the chamber when the speaker would be elected. Hence, it is believed that powerful individuals pressed buttons and the EFCC moved against Bankole even though he was to be in the office of the commission the following day.

A statement issued by his media aide, Idowu Bakare said: 'Information at our disposal indicates that pressure was mounted on him to write a statement implicating some members of the House.'

According to sources close to the National Assembly, the arrest was to ensure that Bankole make statements that can implicate Tambuwal which would then become an issue of campaign against him. The question would then be asked if it is morally right for somebody involved in financial impropriety to occupy such high position. Others said if Bankole had implicated Tambuwal, he would have been arrested early in the morning before the election was held.

As it turned out, the absence of Bankole at the chamber of the House when the election was held did not affect the outcome of the election.

PDP zoning in crutches
The ruling party now has a problem on its hands because the outcome of the election in the House has made nonsense of the zoning of offices as announced by the party after the elections. The positions of Vice President, Senate President and Speaker of the House of Representatives are in the North. The South East has the SGF, Deputy Senate President and Deputy Speaker of the House. The South West where PDP performed poorly at the election is left with nothing. The speculation is that the party will soon embark on far-reaching alteration of the zoning arrangement. Party stalwarts say the only position the South West can have is the position of national chairman.

Naturally, the party reacted angrily to the outcome of the election. It called an emergency meeting of the National Working Committee (NWC) and condemned the outcome of the election in very strong language. A statement signed by the National Secretary, Alhaji Abubakar Baraje read in part: 'Zoning is still an integral part of PDP constitution. The idea of zoning is a well thought out philosophy for national stability and integration. It is the only guarantee that every segment of Nigeria enjoys a sense of belonging by being represented in all the decision-making organs of the government of Nigeria.

'The NWC is currently consulting other organs of the party to re-assess the entire scenario and will come up with an appropriate policy in due course.'

But Tambuwal took steps to appease the party when he paid a courtesy call on the acting national chairman at the party head office. The party chairman, Alhaji Bello Mohammed remarked that the party was unhappy with the outcome of the election but that the party has accepted that 'what has happened has happened.' He welcomed back the new speaker and his deputy, Emeka Ihedioha and promised that the party in its usual way would resort to its method of resolving internal crisis. Tambuwal, on the other hand, reportedly pleaded for forgiveness saying that his election was an act of God. President Goodluck Jonathan has also said he will work with Tambuwal with emphasis on the fact that he is not against him in any way.