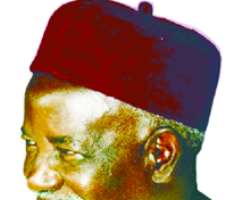 •Balarebe Musa
Second Republic Governor of Kaduna State, Alhaji Balabare Musa has said that the repeated marginalization of the South-East is because Nigeria has not forgiven the Igbo's over the civil war.

In an interview with Musa who was the governorship candidate of People's Redemption Party (PRP), in the just concluded election, said Igbo are still paying the price for the civil war. He also spoke on the reason why he will not go to the tribunal despite his claim that the election was massively rigged.

2011 election
The election was not free and fair. Rather, it was disgraceful. It was something planned by the President, knowingly or unknowingly. He is a part and parcel of a conspiracy against the stability of Nigeria. He is one person that came looking fresh and clean. He shouldn't have allowed himself to be involved in the abandonment of the zoning system, which has sustained Nigeria as one country since 1959. The conspiracy has now exposed the fact that as he became the President, is saying that the zoning system should be sustained.

As someone who has part and parcel of a conspiracy, he did everything to destabilize politics by abandoning the zoning plan, so that he can become president. Now that he has become president, he wants to return to zoning.

The abandonment of zoning is one of the things that will perpetually marginalize South-East because with this zoning system, any part of Nigeria can hope to present a president. The South-East, which has never produced a president, will never produce a president without zoning system. You know that there won't be stability if a section of the country can be so neglected.

The civil war ended and since the so- called surrender, has anything come from the South-East to assure Nigerians that the civil war problem will not repeat itself? Since they surrendered, they have integrated themselves into Nigeria. The leaders of the country are refusing to integrate them. Until the days of late Yar' adua, the South-East was not part of the security system in the country. They did not have their own share of the leadership in every part of Nigeria. What they relied on in the past is trading. They are not relevant except in spare parts business. They still have grievances and that grievances should be looked into.

Way forward
In the case of Nigeria today, the issue about the way forward is a big one. Those in control of power and economy at every level did not get there on the basis of merit. I can be frank with you, thieves are now ruling the country from top to bottom and with this type of situation how can we expect rationality? We still cannot have an acceptable election. Every election is worse than the previous one. Those who are knowledgeable know that the 2011 election was worse than others. Do you know the role thumb printing of ballot paper played in the 2011 election? Do you know the role taken by communities to show that there is no election in their community and to ensure that they elect the person they want? All there lies about free and fair election will come out if we use forensic examination on our ballot papers. It will expose everything. It will expose their lies that both local and international observers said, that the election was free and fair.

Post election violence
The crisis that erupted in the north originally was political. It was a crisis between the leading political parties in the North. Eventually, like everything in Nigeria, it took the form of ethnicity and particularly religion.

Election tribunal
I am not going to the tribunal because it is a waste of time. I don't have the money and there is no guarantee of justice in the judicial system. It is a question of the highest bidder taking the day. We cannot afford the hundreds of millions or naira required to process a petition successfully. Apart from the lawyer, the legal cost is another issue. The court charges a lot of money in the filing of documents.

It is something that we will not bother ourselves about. We have already transformed ourselves since 1983 into a movement that can compete in any election, if the conditions are right. The important thing is that PRP is our party and we have since we have transformed ourselves into a movement and electoral political party. We believe that our struggle is protected and permanent. Therefore been rigged out of the election does not mean that we will stop. It does not matter whether we are registered or not. It does not also matter whether we can contest election or not. We are a movement.

Deregistration of parties
We are not bothered just like I told you. We have formed a movement and a political party that can contest in an election. Whether we can participate or not, we will remain because we believe that our struggle is protected and permanent. Coming to the legal situation, the electoral act that says that a political party that does not win one state house of assembly election or national assembly election be de registered is subject to the reading of the constitution.

And the constitution under the fundamental provision does not allow that to happen. In any case, there is even a practical issue. That same law did not say the parties that have been de registered cannot be registered again. It is a futile attempt by those in power to impose themselves on the people. In any case, after all, we didn't get registered just for asking. We went to the federal High Court and to Federal Court of appeal in 2002 before 57 political parties where registered. In 2002, when we went to court, only six parties were registered and the electoral body refused to register any more political party. We had Gani Fawehimi who is so patriotic and committed that he stood in for us. It is unfortunate now that we don't have a lawyer who is so patriotic and democratic that can fight for us. If necessary, we will reach that stage, because they must have seen the futility of questioning what the Supreme Court has already done.

On government agenda
Why should I bother when I know that they have rigged the election? They are not going to do anything good. The kind of people in government today is not the type of people that are patriotic or can perform. Now, they will make the situation of Nigeria even worse.