Gadhafi investigated over use of drugs for rapes 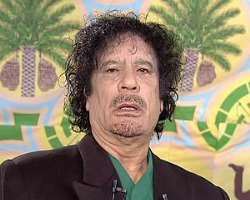 UNITED NATIONS -- The chief prosecutor for the International Criminal Court said Wednesday he is investigating whether Libyan leader Moammar Gadhafi provided Viagra-type drugs to Libyan soldiers to promote the rape of women during the current conflict.
Luis Moreno Ocampo said his office is collecting evidence on rapes and has become "more convinced" that Gadhafi decided to punish women by using rape as a weapon, which would be a new method in the Libya civil war of instilling fear and trying to control the population.
He told a news conference after briefing the U.N. Security Council on Darfur that some witnesses confirmed the Libyan government was buying containers of Viagra-type drugs to carry out the policy, and "to enhance the possibility to rape."

"We are trying to see who was involved," Moreno Ocampo said.
He said it was difficult to know how widespread the use of rape is in Libya.
"We're getting important information," Moreno Ocampo said. "In some areas we had a number of a hundred people raped. The issue for us was, can we attribute these rapes to Gadhafi himself, or is it something that happened in the barracks."
The U.N. Security Council voted unanimously on Feb. 26 to refer the Libyan crisis to the International Criminal Court, the world's permanent war crimes tribunal.

On May 16, Moreno Ocampo asked judges to issue arrest warrants for Gadhafi, his son Seif al-Islam Gadhafi and intelligence chief Abdullah al-Sanoussi, accusing them of committing crimes against humanity by targeting civilians in a crackdown against rebels who are trying to end his more than 40 year rule.

Judges are now evaluating the evidence and must decide whether to confirm the charges and issue international arrest warrants. If the arrest warrants are issued, Moreno Ocampo said he may add the charge of rape to the case.
Moreno Ocampo said the two cases against the three top Libyans involve the shooting of civilians in demonstrations in different cities at the beginning of the conflict and the arrest, torture and forced disappearance of people, particularly in areas under Gadhafi's control.
But he told reporters that witnesses interviewed by investigators asked why the court was focusing on arrests, tortures and disappearances over the last three months because "it happened for 20 years - so we'd like you also to review all of them."