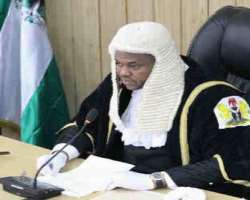 In an email statement signed by Convener and Chairman, Emmanuel Ohai and Publicity Secretary and Spokesperson, Lauretta Onochie, the group said it is happy as Deltans have once again spoken loudly and clearly.

“The Convener, The Board of Trustees and the entire membership of Umu Anioma Foundation are happy to congratulate you, Mr. Victor Ochei as the duly democratically elected Speaker of the Delta State house of Assembly. In spite of all the difficulties that went with this particular process, the people of Delta State have spoken loudly and clearly and you have emerged as the Speaker of the Delta State House of Assembly. We are proud that a notable Anioma son has emerged winner of such a remarkable contest to represent our people. We wanted to let you know that you have our full support to represent Anioma,” the foundation said.

“As the highest ranking democratically elected office holder from Anioma geographical area in Delta State, we are confident and hopeful that you will be a worthy representative, consulting with, listening to and speaking on behalf of Delta State in general and Anioma people in particular. We have no doubt that you will champion the cause of development of the state in general and the Anioma geographical area in particular, whilst leading the vanguard on issues affecting our people during your tenure of office.

“We ask that you be fair and just in all your dealings with and on behalf of the people of Anioma bearing in mind the campaign pledges and policies that you have undertaken to fulfill when elected into office. We believe that it is important that those pledges remain at the forefront at all times. Anioma and now Delta people have placed their trust in you and therefore, it is crucial that this trust is maintained and that you are transparent and accountable to them.

“We would also like to bring to your attention the desperate needs confronting Anioma people. These include the non-availability of basic day-to-day living amenities like clean drinkable water, regular supply of electricity, good schools at every level of education, well equipped and staffed hospitals, good and accessible roads which are lacking in most Anioma communities.

“We invite you to support the actualization for the PROPOSED ANIOMA STATE as we sincerely believe that Anioma State will bring about the much needed development for our long-marginalised people.

“At this point, we would like to ask what you will do for Anioma people in your capacity as the Speaker of the Delta State House of Assembly especially in the areas of functional hospitals, good education, good roads and gainful employment for the teeming unemployed Anioma youths. This task to rebuild Nigeria in general and Anioma in particular depends on this road map and Umu Anioma Foundation is keeping a watchful eye on these issues.

“Once again, please receive our warm-hearted felicitations on your election,” the statement added.