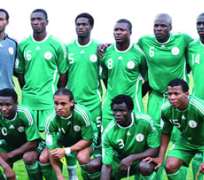 Super Eagles' captain, Joseph Yobo, rescued Nigeria's Super Eagles from defeat in Ethiopia with a late equaliser in a must-win Africa Nations Cup qualifier in Addis Ababa as Guinea returned to the top of the group B table after recording 4-1 triumph over Madagascar in Conakry yesterday.

The Group B clash finished 2-2 for Nigeria to move top, temporarily, at least, ahead of Guinea on goal-difference with seven points from four matches, while Ethiopia are third on four points. Guinea now has 10 points with Nigeria still in second position with 7 points as Ethiopia and Madagascar are at the bottom.

Nigeria host Guinea in the final round of qualifying in October – could be a decider although The Syli Nationale really did help their goal difference today. Ikechukwu Uche put Nigeria in front after 26 minutes, before the home team restored parity four minutes from the break through Saladin Seid. Ethiopia went ahead five minutes into the second half when Seid again struck as he cashed in on a blunder by defender Efe Ambrose.

Yobo grabbed a much-needed draw for Nigeria four minutes from full time. Coach Samson Siasia made only two changes to his starting XI from Wednesday's friendly against Argentina - Ahmed Musa in for Kalu Uche, who was excused to return to his base in Spain, and Peter Utaka preferred to start ahead of Everton's striker, Victor Anichebe.

New Fenerbache of Turkey striker, Emmanuel Emenike, did not play a part in the game as he was down with fever.