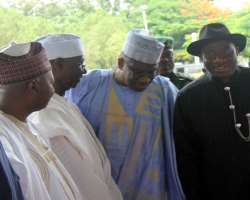 ABUJA, June 03, (THEWILL) - President Goodluck Jonathan today declared that the reform and transformation of the polity must begin with the ruling Peoples Democratic Party (PDP).

This is even as he insisted that the only way to build and strengthen political parties and institution is to ensure that there is a high level of disciple among members of the party.

The President made this declaration at the opening ceremony of the two-day retreat organized by the party for its elected public office holders in Abuja.

Those attending the retreat holding at the International Conference Centre, Abuja are the Vice President, Governors and National Assembly members elected on the platform of the PDP.

According to Mr. Jonathan, though the liberal nature of democracy vests abundant freedom on the citizens and political players, it also attracts high level of discipline, sacrifice and orderly conduct.

“It is a fact that the liberal nature of democracy makes it the most suitable form of political administration and democracy vests abundant freedom on the citizens, as well as on the political players,” the President stated.

Jonathan said that it is imperative that members of the ruling party strive to subject themselves to the guidance of its leadership.

“The message is that despite the free-handedness of democracy, there are basic rules of conduct and behaviour that regulates the actions of members of every political party to ensure cohesion and achieving a common purpose for the good of all. We will reform to enable us achieve our objective.

“Therefore, the reforms to transform the polity must begin at home. We must all work together to subject our party to the much needed reform so that it can position itself for the great task ahead.”

He also noted that party decisions will be easier to enforce if our decision making process is democratized.

The President reminded the elected governors and lawmakers of the high expectations from Nigerians and admonished them to act in the best interest of their people and not to betray the mandate given to them.

He commended the 6th National Assembly that wound up on Thursday for the harmonious relationship between it and the Executive arm of government, stressing “the executive-legislature symbiosis is particularly important because of the oversight functions of the legislature.”

He described the new dispensation as a “season of transformation,” and explained that his meeting with leaders of major opposition parties last Wednesday was aimed at building a common understanding that places the interest of the nation above that of the party or partisan interest.

“An important outcome of the meeting is that the leaders of political parties are now to meet every quarter so as to deepen the gains of togetherness as we strengthen the pillars of our union,” the President said.

Earlier in his address, the acting national chairman, Haliru Mohammed said the imperative of unity and co-operation in the delivery of the party electoral promises is the essence of the two-day retreat.

“The retreat is a timely opportunity to remind ourselves of the need for co-operation between the executive and the legislature, on the one hand, and the party on the other hand, in order to attain the goals of good governance and sustainable development,” he said.

The chairman noted that one of the factors that would enhance co-operation and synergy between the Presidency and the National Assembly is inherent in the concept of party supremacy.

The acting chairman regretted that PDP has for too long been bedevilled with history of indiscipline and attributed the failure of the party to win some states and seats in the April election to failure of some of its members to play according to the rules.