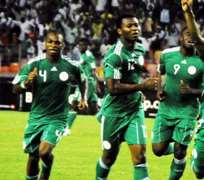 By Tony Ubani
Argentina came, saw and were conquered  by the Super Eagles of Nigeria, who ran out with a thumping 4-1 win. It was their first victory in four attempts over the south American giants at the senior level

Dubbed The Match by Guinness, the sponsors, yesterday's high-profile international friendly saw the Nigerians producing an unbelievable first half display, which saw Ikechukwu Uche scoring a brace and Obinna Nsofor netting a penalty kick to take the Eagles to a 3-0 half-time lead.

Although the La Albiceleste (The White and Sky blue), started the first half on a high, controlling ball possession in their own half, it was the Eagles who made their possession to count when Joel Obi released a through ball to Ikechukwu Uche, whose half-blocked shot looped over goalkeeper Adrian Gabbarini in the 10th minute.

It was the perfect start that Coach Samson Siasia, who was facing his first real test from outside the shores of Africa, could have wished for, having been on the receiving side of Argentina victories over Nigeria as a player at the 1994 World Cup in the United States of America and a coach at the 2005 FIFA Under-20 World Cup in the Netherlands and 2008 Beijing Olympics football finals.

The night got even brighter for Siasia, who saw his team go 2-0 up on 28 minutes as ObinnaNsofor converted from the spot, though the Argentines might have a case for complaining about the soft penalty, that centre referee from Niger Republic, Ibrahim Chaibou, awarded the Nigerians after Federic Fazio fouled Victor Anichebe in the box. It appeared a harsh call.

And it was to get even better  for the homers just in the 40th minute as  a lightning counter-attack ended with Uche getting his brace with a far-post header., from perfect left-foot pass from Taye Taiwo, who had overlapped to join the attack.

Second-half substitute, Emmanuel Emenike, who replaced a slightly injured Anichebe, at the start of the interval, took the game off the reach of Argentina, when he beat hesitant defenders, before lobbing beyond the reach of goalkeeper Gabbarini, to send the Eagles into fourth heaven. Mauro Bosseli scored a consolation for Argentina, through a penalty kick as the referee tried to make amends for the penalty gifted Nigeria in the first half.

It's team work - Ike Uche
Super Eagles striker, Ikechukwu Uche has attributed Nigeria's 4-1 victory over Argentina to teamwork and the strong desire of the players to break the jinx which had seen the south Americans beating Nigeria  in the past.

After scoring two goals that fetched him the Man of the Match award  Uche said he was happy to be recognised but maintained the award belongs to the entire team.

'I am happy to be recognised but this victory belongs to the team because we wanted to win this game and give our fans something to smile about. The team is on course for great things and I thank all my teammates for their efforts', said Ikechukwu.