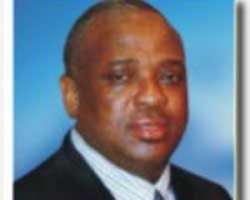 A FEDERAL High Court, Lagos has stopped the purported removal of Chief Osa Osunde as a director and the chairman of AfriBank Plc by the Central Bank of Nigeria (CBN) and its Governor, Mallam Lamido Sanusi, through a letter dated May 12, 2011 and headed 'withdrawal of approval to remain as director'.

Particularly, the court restrained the defendants or anyone of them by themselves, their servants, agents, officers, privies or howsoever from enforcing, giving effect to, carrying out and/or taking any step or further steps in pursuance of the execution and/or in furtherance of the letter dated May 12, 2011 and headed 'withdrawal of approval to remain as director' and the content thereof pending the hearing and final determination of the motion on notice filed by Osunde.

The court presided by Justice James Tsoho also ordered that the said letter dated May 12, 2011 and headed 'withdrawal of approval to remain as director' and the content thereof under the hand of the CBN's governor stands suspended pending the hearing and final determination of the motion on notice.

In the order, which was sequel to an exparte application by Osunde through his counsel, Onyebuchi Aniakor dated May 19 and filed May 23, the judge stated that Osunde shall be at liberty to continue to remain as director and chairman of Afribank pending the hearing and determination of the motion on notice.

The court further ordered the plaintiff to issue and/or serve the originating summons and all the court processes to CBN and its governor through substituted means on any of their officials in Abuja and adjourned till June 7, 2011 for hearing of the motion on notice.

In the motion, brought pursuant to order 3, Rules 6, 7 and 9 of the Federal High Court (Civil procedure) Rules, 2009, Section 48(2)(B) of the Banks and Other Financial Institutions (BOFIA) Act Cap. B3, LFN. 2004 and section 36 of the 1999 constitution of the Federal Republic of Nigeria, Osunde is seeking a declaration that the CBN's governor or any other body CBN inclusive cannot remove him without an order of a court of competent jurisdiction.

Osunde, in the motion which had the CBN, its governor and AfriBank as defendant seeks a declaration that given the provisions of section 36 of the 1999 constitution, the CBN's governor or anybody or authority, CBN inclusive cannot validly proceed under or pursuant to section 48(2)(b) of BOFIA to remove him without giving him a hearing thereon.

Osunde further seeks a declaration that to the extent that the CBN's governor's letter dated May 1, 2011 addressed to him purports to claim to have disqualified him from continuing to remain in office as director of AfriBank and/or to have withdraw his subsisting right or entitlement to remain in the said office purportedly under or pursuant to section 48(2)(b) of BOFIA or any regulations made under the said enactment in the absence of a determination and/or declaration of a court of competent jurisdiction and without giving him a hearing  the same invalid, null and void and of no effect whatsoever.

The plaintiff therefore seeks an order of court restraining the defendants by themselves or any one of them, their servants, agents, assigns, privies or howsoever from and/or in any manner whatsoever disturbing his lawful occupation of the office of director and chairman of AfriBank until his tenure of office duly expires.