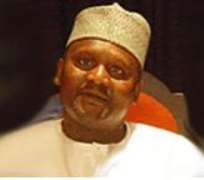 It would be recalled that Danjuma's acceptance of an offer to be Minister of Defense was one of the reasons, Obasanjo cited for accepting to run for in 1999. Hear him:

“I will go on exile if Obasanjo is not elected President”. But when Danjuma celebrated his 70th birthday some years later, our correspondent inquired why he did not invite his friend Obasanjo, he responded “I did not invite him and I don't know what I would have done if he came un-invited. I would have called the police to throw him out.”

Continuing he said “Obasanjo is the most toxic leader that Nigeria has produced so far. A country that took him out of jail and made him a president, he abused Nigeria, deceived Nigeria and deserves a second term in prison and we will make sure he ends up there.”

Huhuonline.com can disclose that their cosy bond, hit a snag when Forbes list billionaire and monopolist extraordinaire, Aliko Dangote come on the scene. Recall that in 2003, Aliko Dangote came to President Obasanjo rescue with N2bn in cash, when vice president Atiku, who had presidential ambition refused to release campaign funds.

Huhuonline.com can authoritatively reveal that T.Y. Danjuma's silence over the circumstance of passive politicking was a personal displeasure on how his former boss, Obasanjo, allowed Alhaji Dangote to ride rough shed over competitors. Sources told Huhuonline.com that Danjuma's friendship with Obasanjo, built over a period spanning more than thirty years, broke down, irreparably because Dangote was given partial terms of salt trading, through Dan Salt, over Danjuma's Union Dicon and other competitors.

Union Dicon salt had existed long before Dan Salt was founded by Dangote. The real story was that Obasanjo gave “illegal generous concessions,” to Dangote. These included tax evasion, tariff and duty waivers and permission to operate a factory inside Apapa port.

Our checks revealed that because Dan Salt enjoyed “in-equitable” advantage, it operated with huge profits while other companies failed through persistent losses. Eventually Danjuma's company went under because it could not stand the heat. Things were so bad that Danjuma was said to have openly described Dangote as a felon at a council meeting.