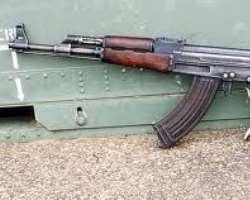 It was a bloody Tuesday in Lagos as some soldiers shot dead two senior police officers and six others.

A Divisional Police Officer (DPO) and the Divisional Crime Officer (DCO) ran into the rampaging soldiers at the ASCON Road, near the Badagry Army Barrack.

Daily Sun gathered that trouble, started between the soldiers and policemen on Sunday when some policemen at a checkpoint along the Badagry Road confronted a man in mufti, suspected to be a soldier.

The man, Daily Sun also learnt was riding on a motorcycle and was accused by the police of contravening traffic rules. Efforts were made by the police to arrest him, but he allegedly resisted arrest. A police corporal was alleged to have opened fire on the suspected soldier who later bled to death. After it realised that the victim was a soldier, all the policemen at road block, in the police stations and on duty along the road removed their uniforms and fled their duty posts.

The fear that the soldiers might come on reprisal attack was confirmed when some rampaging soldiers stormed some police stations along the road but did not meet their targets. The aggrieved soldiers therefore barricaded the road, searching for policemen inside the vehicles plying the Lagos/Badagry expressway.

While the soldiers were searching for policemen, the slain DPO, Mr. Samuel Salihu contacted the Army High Command who invited him for a peace meeting yesterday.

It was gathered that while the DPO, his DCO, who was identified as Samson Okedusi, a Superintendent of Police (SP), orderly and other officers were on their way to 242 Battalion, Ibereko Barracks, they were allegedly ambushed by some soldiers who opened fire on them. By the time the smoke settled, the DPO, DCO and six other persons were stone dead.

As at press time, dead bodies of the DPO and others were lying on the road.

Meanwhile, the Nigerian Army yesterday said that none of its men was involved in the brutal killing of the two police officers and six other persons in the Badagry area of Lagos.

Army spokesman in Lagos, Lieutenant Colonel Kayode Ogunsanya told Daily Sun on phone that none of the Force's personnel was involved in the killing of the DPO, DCO of the Badagry Police Station over a minor incident that started on Sunday.

Ogunsanya said the suspected killers of a soldier on Sunday night at the Ibereko Barrack of the 242 Reconnaissance Battalion are in the custody of the Nigerian Army and that the killing of the soldier is being investigated.

Ogunsanya in a statement which was sent as SMS reads: 'A soldier from 242 battalion was shot and killed by policemen on May 22, 2011. The suspected killers have been arrested and in our custody. The case is being investigated. However, no soldier is involved in the killing of the DPO and the policemen as being speculated.'

Meanwhile, the Inspector General of Police (IGP), Mr. Hafiz Ringim, was in Lagos to commission some communication gadgets at the state Headquarters, Ikeja, when news about the killing filtered in.

He was said to be consulting with the Army High Command to find a lasting solution to the war allegedly declared on the police by the soldiers.

A senior police officer who spoke on condition of anonymity told Daily Sun that he spoke with the DPO a few minutes before he was killed.

He said: 'I asked him what he was doing about the matter and he told me that he was on his way to the barracks to see the commandant. When I called him few minutes again, his orderly who escaped death by the whiskers answered the phone telling me that the DPO had been shot.'

Meanwhile, there was tension along the road as shop owners hurriedly locked up their shops. Some residents had started fleeing the area pwhile others locked themselves up in their homes.

A driver, Matthew Nwaogu described the incident as a war. According to him, he was on his way to the Republic of Benin when he started hearing gunshots, thinking that armed robbers were shooting, he drove straight to a police station.

At the police station, he saw some armed soldiers ransacking the station. He said one of the soldiers after searching his vehicle and the passengers, ordered them to lie down so that they would not be hit by stray bullets.

Daily Sun investigation revealed that some of the deceased and injured victims were civilians were going on their normal businesses.