THE LADY WITH THE BIRKIN BAG 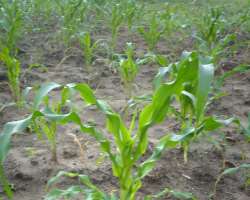 The author Charles Dixon put it well when he said “the trouble with one’s only tool being a hammer, is that you’re always looking for a nail to hit”; the supposition being that even when it’s a screw and the needed tool is a screw-driver, there we’ll be hammering away at the screw!

Two years ago I grew a test crop of corn on the premises of one of the largest commercial farming ventures in Nigeria. It was late – May – and the locale for this time of year was not ideal, but you can see the 100% success rate of the corn I grew from the lead photograph – of this essay - taken by staff of the farm after I had left.

Anyone I showed the photo to seemed to immediately exclaim with some regard, “Genetically modified” corn or GMO Corn! Far from it; with a simple tool – that could be locally made - some bio-degradable materials, and a little prepatory study, this is success that can be replicated over and over again.

By the time I left for the US following my agrarian expeditions, I was reading in the paper that due to some new innovations in farming techniques, we could expect a 40% increase in corn and other cash crops; did I mention that we also successfully planted soy beans at this same location. Littered around were the failed corn crops of people who were the offspring of generations old farmers; it was easy for me to see why. It is – the Nigerian farming community – a community that actually farms with considerations for failure, that actually ensures the failure of the crop by completely extinguishing hope with specific technique. This I can demonstrate.

All this to say that no matter how much urea you pour onto the soil success will prove ephemeral, as the very best outcome. Here are some of the negative outcomes surrounding the application of urea:

1. Urea soil fertilizer is manufactured to be sold and used in concentrate; this very factor will lead it to be abused much in the way DDT was. DDT eventually was used in fishing, i.e. you poison the fish and they pop to the surface for a “deadly harvest”. These are dangerous substances in unsophisticated hands.

2. In the 1980’s we tried “fertilizer”. That project was called “Green Revolution” and involved the application of massive amounts of fertilizer to boost production yet here we are again talking about “production.”

3. Markets: This is the very worst aspect for me, as Nigeria should definitely be cognizant of the demands and desires of the global food market. The buzz-words there are: “Gluten-free”, “Sugar-free”, “Healthy” and lastly: “Organic”. The application of chemical fertilizer is the surest way to engender lower returns for your crops in a global food market.

1. This from the following site: http://agriculturalproductsindia.com/fertilizers/fertilizers-urea-fertilizer.html

Disadvantages:
1. Urea releases harmful pollutants during its manufacturing process. The manufacturing involves emission of pollutant gases in the air.

2. It exerts higher concentrations of ammonia in the soil making it even more acidic and thus retards the soil of its natural fertility.

Cautions:
1. During storage, make sure that it is never stored in the vicinities of ammonium nitrate.

2. Never use small, fast-moving augers to move the urea.

3. Maximum width for application of urea should be 50 feet and not more than that.

4. Keep away from corn seeds and never enhance their direct contact as the results are not favorable.

When urea is applied on acidic soils of higher pH i.e above 7.5, it should be incorporated into the soil as soon as possible.

Urea is a high moisture absorbent therefore it should be stored in sealed and well enclosed bags.

Avoid direct contact with urea fertilizer as it may prove to be hazardous to skin and when inhaled might cause severe allergic reactions.

From yet another resource: http://www.ecochem.com/t_natfert.html

While urea is, indeed, an organic compound, it will not support the bacterial growth that is essential for the formation of humus. When urea is metabolized, the products are ammonia and carbon dioxide. Thus, urea yields carbon in a form that will not support the oxidative metabolism of soil bacteria. To accomplish that, carbon must be in the reduced state, combined with hydrogen as it is failing to support the growth of soil bacteria, and therefore the formation of humus, it does not quality as an "organic fertilizer."

The intensive use of inorganic nitrogen fertilizer (or urea) may so overload a humus-depleted soil with nitrate as to cause it to leach into surface waters when nitrate levels may readily exceed public health standards. Leached nitrate also wastes expensive fertilizer synthesized from an increasingly diminished supply of natural gas. Apart from any other possible and yet to be established virtues, the use of organic fertilizer (as defined above) avoids these difficulties and holds the promise of restoring the natural source of soil fertility - humus. While it remains to be seen whether food grown in such naturally fertile soil contributes distinctively to the health of people, the practice can, it seems to me, contribute significantly to the health of the soil and the economy."

In conclusion: In Malibu, California where there is an Organic Farmer’s Market just a stone’s throw from “Billionaire’s Beach”, absolutely nothing grown under this new “regime” of urea, could EVER be sold here! Should our objectives in terms of long term national food planning not center around the production of fruit and produce that is good enough to consume anywhere in the world? Today even dog food and dog treats are available – standard – as “organic”. Organic versions of many of the fruit we consumed as children could be vast forex earners for Nigeria, why dent the possibilities of these fantastic opportunities? Chile earns hundreds of millions usd. each year supplying organic winter asparagus and blueberries to the US market; in the winter, organic blueberries are $5+ for a small 6oz “clamshell” which leads me into solutions, since I’m not a “stone thrower”:

1. Farming methods (already treated above)
2. Packaging: Farmers need better materials to package produce; biodegradable clamshells and - same – for crating for produce like tomatoes – for example - would be a definite improvement on the current “open basket transport method” that results in 70% spoilage! (Now there’s a plant that must be built;-)

3. Produce processing: Establishing localized capabilities for canning and preserving produce that would otherwise be wasted (at the individual farmer level)

*When we look back, for me one of the hallmarks of the current administration will be the appointment of a woman to lead the petroleum ministry and as our representative at the Organization of Oil Producing & Exporting Countries’ meetings. There, she sits with the representatives of countries where women are so restricted that when they go to lingerie shops, the attendants are men; little wonder the often touted shopping trips to Harrods for underwear. Thus far be it for me to attempt to tear down the most powerful woman on earth, but on this project she is the victim of bad advice.

Today, the august body – OPEC - suffers a PR deficit. They are currently being blamed in the “FOX News orbit” as the source, and primary beneficiary of the current “run up” of petrol to nearly $5/bbl US retail; this despite the fact that the CEO of Exxon/Mobil stated in a congressional hearing – a week or two ago - that 30% of oil’s value is speculation. Our children need to go to school and OPEC needs a “voice”. If the majors are enjoying record profits but getting away with alleging we’re getting all the money, isn’t it time to “pass that buck” back, i.e. pass the PB?

Since we’re still seeking knowledge we don’t tend to watch FOX News, but your Facebook page can always tell us when you’re on this or other media!