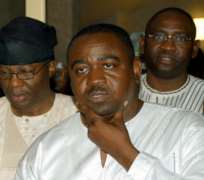 ABUJA, May 22, (THEWILL) - The Action Congress of Nigeria (ACN) has warned that the seeming unwillingness of President Goodluck Jonathan to act urgently to stop the serial killings of the party's members in Benue may be taken as a green-light by the perpetrators to continue such dastardly acts.

In a statement issued in Lagos on Sunday by its National Publicity Secretary, Alhaji Lai Mohammed, the party also warned that failure to stop the killings may be misinterpreted to mean that the President will only act to protect lives and property when those at the receiving end are members of his party.

''You, President Goodluck Jonathan, are the President of Nigeria, not that of the PDP. The security and well-being of all Nigerians, whether they are in your party or in the opposition, are at the core of your presidential responsibility. It is therefore incumbent on you to take urgent measures TODAY to stop the impunity that is taking hold in Benue, where several ACN members have been killed, starting from the run-up to the last general elections to this moment.

''If you fail to act, those at the receiving end may be forced to take the laws into their own hands, and the country will have anotherconflagration to contend with. Setting up a panel then to help unravel the immediate and remote causes of such conflagration will amount to shutting the pen after the chickens have bolted!'' ACN said.

It reminded President Jonathan of his widely quoted statement that no one's ambition is worth the blood of any Nigerian, saying this is enough reason for the President not to be seen to be unconcerned when any Nigerian is being harassed, maimed or killed for political reasons, as it is now happening in Benue state.

''If the President needs an impetus to act, he should call for the pictures of the body of Charles Ayede, the Senior Media Adviser to our governorship candidate in Benue (Professor Steve Torkuma Ugbah) who was shot dead when gunmen attacked Ugbah's convoy between Abuja and Makurdi May 13th 2011.

''The execution-style killing of an unarmed Nigerian in his own country, as depicted by the gory pictures of Ayede's bullet-ridden body,is enough reason for any leader to say enough is enough,'' the party said.

ACN said without mincing words, political intolerance by the Gov. Gabriel Suswam-led administration in the state, coupled with institutional conspiracy which has seen the police turning the other way when opposition supporters are being targeted, is the cause of the worsening harassment and killings in Benue.

''The thinking in the state government's circle is that once ACN members are subjected to relentless attacks and arrests, as currently being carried out, the party will be forced to drop its ongoing legal challenge against Suswam's stolen mandate. But nothing can be more inaccurate,as the party will not be intimidated into abandoning the recourse to the only civilized way of contesting electoral disputes, which is to head to the election tribunal,'' the party said.

ACN said the claim by Gov. Suswam, that his life is being threatened (which has paved the way for the mass arrest and detention of ACN leaders and members in the state) is the biggest indication yet that he does not have the people's mandate to govern, adding: How can a Governor who claims to have the mandate of the people be afraid of the same people? How can a Governor who is the chief security officer of his state be crying out over insecurity to his own life?''

It said as for the police, the President may want to ask the Inspector-General of Police to explain why all complaints made to the Benue police command by the ACN have been largely ignored, thus emboldening the Barbarians in the state to continue their attacks.

''During the electioneering campaigns, PDP thugs attacked our convoys severally and we reported the incidents to the Police - No arrest has been made; During the election proper, ACN agents were beaten up and, at least, two of them were killed - one at Logo and the other at Gwer-West - No arrest has been made; There have been threats of kidnapping of the gubernatorial candidate, while some of our party members have been kidnapped and kept behind the bars in private detention camps owned by PDP thugs that are loyal to Gov. Suswam. The kidnapping of Hon. Mtsterkyaa and

''ACN leaders have been systematically attacked by gunmen in politically-motivated circumstances. The cases of the State Chairman Comrade Aba Yaro, B.B Nungwa, and many others have been reported to the Police - No action taken; Threats of assassination of several of our members, including Barrister Mrs R. Ako, Hon Adzua Ashongo, Adaa Maagbe, Charles Ayede (who was later killed), Imoter Nungwa, B.B Nungwa, Hon. Abua Yajir, Hon. John Dyeh, Chief Emmanuel Viashima, Engr Charles Avul and gubernatorial candidate Ugba were all reported at different times - No sign the cases are being investigated,

''Mr. Tahav Agerzua, a close associate of Gov. Suswam, was recently caught taking photographs of Mr Adaa Maagbe’s residence. Both Charles Ayede, who was therafter killed May 13th, and Mr. Maagbe live in that house. We reported this to the Police but nothing came out of it. Finally, Gov.

Suswam’s ADC, DSP Dickson O. Pawa, was recently arrested with a cache of arms, but the Governor ordered his immediate release. We have cited all these instances to show the world that indeed, Benue is sliding toward anarchy, no thanks to the desperation and intolerance of the state governor, aided by a complicit police,'' ACN said.