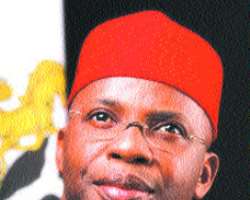 Ohakim as 'Ikiri'
Bush baby or galago, known in Igbo language as 'Ikiri', is a peculiar animal. As a result of the rare qualities it possesses, the out-going governor of Imo State, Chief Ikedi Ohakim, likened himself to the animal. He was said to have asked his supporters to address him as 'Ikiri'. Ever since he added the nickname to his numerous names, the alias is fast displacing the names given to him by his parents. He became popular or unpopular with that name, depending on the side of the coin you are viewing it from. It is not only his friends and supporters who call him 'Ikiri', his foes do too.

As a matter of fact, Ohakim is better known now with the nickname, especially, in the South-East, than with Ikedi, even among the deaf and dumb.

About the animal, called Ikiri
It is a small, ugly, nocturnal animal, which lives on trees. It is not its size or other physical features that distinguishes it from other animals, but its ability to hold tight, whatever is in its grip, even in death. If a hunter kills the big, round eyed animal with large ears, he needs extra efforts to force it to fall from the branch of the tree it was holding before it was shot. Sometimes, the hunter may be required to climb the tree, to cut off the branch of the tree the animal is clinging to, before it could fall down with the branch.

It is the same thing when the animal is entrapped. It holds the trap tightly even when it had been confirmed dead. The owner of the trap is expected to disentangle the hands of the dead bush baby from the trap.

This attribute of the animal gave rise to the Igbo aphorism: 'Onya ji ikiri, ikiri ji onya (Ikiri is entrapped, and the trap is also entrapped by ikiri.)

How it all started
In one of his campaign rallies, which was said to have taken place at Dan Anyiam Stadium, Owerri, the governor, after mounting the podium, told his supporters to shout the name, Ikiri, and there was a thunderous echo of Ikiri! Ikiri!! Ikiri!!! 'Yes, I'm ikiri and also, a lion which doesn't let go any prey in its grip,' he told the crowd. The governor was actually implying that there was no vacancy in Douglas House (Government House), Owerri. That was how, like wide fire, the news of the governor's self-given nick-name spread in all parts of the state. The nickname didn't go down well with Imolites, who felt Ohakim was daring, and spiting on them, even in the face of criticisms, mis-governance and non-performance.

Therefore, to them, it became a challenge to disentangle the hands of 'Ikiri', thereby, forcing him to lose grip of the leadership of the state, which has not in anyway changed things for the better for them.

At another forum, he reportedly likened himself to the venomous and dangerous snake, viper. But after the governorship election was declared inconclusive and a supplementary one put in place in the four remaining local government areas and Orji ward, Ohakim went to Ngor Okpalla and was quoted as boasting before his supporters that he is a rabbit that had blocked all routes or loopholes his enemies would have used to launch attack on him. This was generally interpreted to mean that money had been used to buy up the electorate, while his foot soldiers were up to the task. All these outbursts and boasts infuriated the people the more, and as far as they were concerned, Ohakim must go.

What is in a name? One may ask. But the truth is that the nickname, ikiri, was one of the factors that pulled down Ohakim from his Olympian height.

Brush with Rev. Father
Governor Ikedi Ohakim was among the few governors whose gods cracked their palm nuts for them (apologies to Professor Chinua Achebe). In fact, the governorship position literarily fell on his laps in 2007. But like the proverbial bird which after a sumptuous meal, decided to challenge his chi to a wrestling bout, (apologies again to Chinua Achebe), the governor began to molest and even ordered the manhandling of a Rev. Father, an action, which pitched him against the Catholic church.

This singular act greatly affected his chances of re-election. The face-off between him and the Catholic church is a big minus for him, considering the large population of Catholic members in the state. The animosity resulted in members of the church praying and fasting, organizing special masses against his political ambition. Besides, using the pulpit to campaign against him, the Rev. Fathers and other men of God in other denominations used every available opportunity to tell their members to vote against him. The Catholic church had told him to apologise or face the wrath of members during the election, but he ignored the advice. But when he realised, belatedly, the danger posed by the cat and mouse relationship between him and the Catholic church, he tried to mend fences but as they say, it was too late to cry when the head is off.

He was said to have visited many Catholic churches to beg for forgiveness, and even donated money and musical instruments. Some of them were said to have turned down the Greek gifts, while others received them but remained resolute in their resolve to vote him out.

This accounted for the mass turnout of Rev Fathers on the day of the election. They did not only cast their votes, they also stayed back to observe the counting and recorded result in the polling booth where they exercised their voting right.

The first lady and PDP women
Her Excellency, Chioma Ohakim is a lawyer. Apart from being the wife of the governor, she always tried to prove to women in the state, especially, members of the PDP women wing, that she is superior to them. The women had always complained of her verbal attack and derogatory remarks against women who are old enough to be her mother. One statement making the rounds during the election, attributed to her, was where she reportedly said publicly, that anybody who doesn't have up to N1million in his/her account, has no business staying in the state capital. That such a person should go back to the village. All you could see is anger of the woman against 'Mama Imo'. They highly expected the governorship election to end her First Ladyship.

Keke NAPEP operators
Operators of Keke NAPEP metamorphosed from commercial motorcyclists or okada riders. Many of them, who could not afford to pay for the tricycle sold by the government on hire purchase system, were forced to go back to their villages. Till date, the okada riders, whether the ones operating the tricycle or those of them rendered jobless by government policy, have not forgiven the exponent of the New Face of Imo. Their anger was that the then in-coming governor did not give them enough time, before chasing them out of the state capital and did not make the tricycle affordable for them, as they were said to have purchased the tricycle from the government at very exorbitant prices. They were always spitting fire and brimstone, waiting to express themselves on the election day. The governor's problem with the keke operators deepened when they heard of his plans to phase out the tricycle completely from the state capital during his second tenure.

According to some of them, who spoke to this reporter, he had decided to restrict their operations to Owerri suburbs and streets, which according to them, was an indirect way of phasing out their means of livelihood, the way he did when they were using motorcycle. But to allay their fears, Ohakim went to the state-owned radio station, Imo Broadcasting Corporation (IBC) to debunk the allegation, but the keke operators said the denial was a mere political gimmick aimed at deceiving them. To further demonstrate the extent to which the operators hated Ohakim's administration, they paid for radio advert some weeks to Rochas Okorocha's political rally in Owerri, and announced that they were going to make available their keke to convey people free-of-charge, to the rally ground. They fulfilled the promise. And on the election day, they made good their threat, by coming out en-masse to vote against PDP.

Encounter with beggars
A story was told of how some disabled persons in the state, who needed some assistance, visited the governor to solicit for his help. But they got a shocker. Governor Ohakim, who was said to have problem in one of his eyes, which resulted in surgical operation in the affected eye, reportedly removed his eye glasses, pointed at it and said, 'I'm also disabled.' The disabled persons were said to have gone home disappointed. They later mobilized their members to vote against their leader, who failed to identify with their plight, but instead, made jest of them. They voted against him!

Chris Anyanwu/Captain Iheanacho factor
Senator Chris Anyanwu was said to have won the primaries for the senatorial seat for Owerri zone. But unfortunately for her, she was not in the good book of the governor, who used every means at his disposal to knock her off and replaced her with Ambassador Kema Chikwe.

Anyanwu defected to the All Progressive Grand Alliance (APGA) and defeated Chikwe, despite attempts by PDP to rig her out. The governorship election was an opportunity for the journalist-turned politician to cut her own pound of flesh from the governor.

Though, Ohakim was declared winner in her local government, Aboh Mbaise, the governor will not forget in a hurry, the role played by Chris Anyanwu, especially, her private radio station in Owrrri, to truncate his political ambition.

Captain Emmanuel Iheanacho, from Owerri, was suspended by President Goodluck Jonathan at the instance of Governor Ohakim. Iheanacho, whose philanthropy and popularity in Owerri zone cannot be wished away, saw the governorship election as a pay back time for Ohakim and he utilized the opportunity very well. He is very popular among the grassroots. The governor failed in Owerri Municipal, Owerri North and Owerri West.