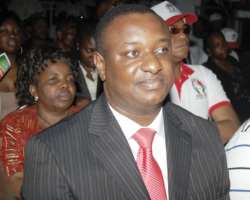 SAN FRANCISCO, May 16, (THEWILL) – The lawyer representing embattled Senator Alphonsus Igbeke from Anambra State, Mr. Festus Keyamo Monday in a statement accused the Nigeria Police Force of conspiring with ‘a cabal’ in the state to ensure that Igbeke is detained and locked out of the inauguration of the new National Assembly on June 02, 2011.

Keyamo’s accusation follows the approval of a warrant for the arrest of the returning senator which was granted by an Abuja Magistrate Court.

The warrant of arrest was issued following allegations of forgery levelled against the senator—the police say he used forged PDP primary papers to obtain a federal high court judgement that ruled he indeed won the PDP Senatorial primary for Anambra North zone ahead of Mr. John Emeka, who the police and INEC say emerged winner.

Mr. Keyamo’s statement reads: “We have read with amazement the widely-circulated story in many of the dailies of today that the Nigeria Police Force has applied to an Abuja Magistrates Court and purportedly obtained a warrant of arrest for Distinguished Senator and Senator-Elect, Alphonsus Igbeke over an alleged issue of forgery. If it is true, this action by the Nigeria Police is a gross abuse of the process of court because the Police have since last month (April) been served with a valid Order of a superior court, the Federal High Court, restraining it from arresting or detaining Senator Igbeke over the same issue until the determination of the case (find attached the said court order). Interestingly, the same Police has filed a copious counter-affidavit in that matter, stating its own side of the story. The case comes up on the 30th of May, 2011.

“However, without waiting for the determination of that case, the Police, apparently conniving with some acclaimed god-fathers of Anambra politics, is now making an attempt to frustrate the process at the Federal High Court by obtaining a Magistrates Court Order!

“The whole purpose of the latest conspiracy is to arrest Senator Igbeke, frame a charge of forgery against him, charge him to court, remand him in prison custody and prevent him from being part of the inauguration of the new National Assembly on June, 2nd, 2011, using the institutions of the State to achieve this. This is the same cabal that have continuously fought against his political aspirations since 2003 and he has always prevailed.

“We call upon the Inspector-General of Police to immediately stop the witch-hunting of Senator Igbeke, a serving Senator and Senator-elect of the Federal Republic of Nigeria. If this is not done, we shall have no other option but to commence contempt proceedings against the Police.

“However, it is important to state the background to this latest conspiracy:

“1. Senator Igbeke contested and won the P.D.P primaries for the Anambra North Senatorial district, defeating five other opponents, including one John Emeka.

“2. The P.D.P then duly forwarded the result of the primary elections to the Independent National Electoral Commission.

“3. However, when Senator Igbeke got wind that his name was to be substituted with that of John Emeka, he exercised his constitutional right by filing a pre-election suit at the Federal High Court (Suit No.: FHC/ABJ.CS/189/2011: Senator Alphonsus Igbeke V. INEC & Ors) in which he challenged the move to substitute him. He tendered in court, through affidavit evidence, the result of the P.D.P primary election in Anambra State.

“4. The Federal High Court, Abuja , presided over by Hon. Justice Kafarati, in a well-considered judgment delivered on the 17th day of March, 2011, declared Senator Igbeke as the authentic P.D.P candidate for Anambra North Senatorial District. Dissatisfied, John Emeka appealed against the said decision. That Appeal is still pending.

“5. However, the opponent of Senator Igbeke, still desperate to stop his candidacy, again ran to INEC to say that the judgment of Kafarati affirming Igbeke’s candidacy was forged by Senator Igbeke. Again, that allegation did not hold water as members of the public and the Press went to the court to confirm the judgment.

“6. It was at this stage that, for the first time, Igbeke’s opponent wrote a petition to the Police, in collusion with some INEC staff, that the P.D.P Primaries’ result which Senator Igbeke tendered at the Federal High Court, and upon which the court delivered judgment was forged and did not emanate from INEC. Meanwhile, INEC that participated all the while in the proceedings at the Federal High Court where the document was tendered did not complain that the document was not from INEC throughout the proceedings until judgment was delivered. A case of afterthought, indeed!

“7. However, still in a desperate bid to stall Senator Igbeke’s campaign, his opponent engaged the police to arrest Senator Igbeke over the issue of the forgery mentioned above. Still pursuing his legal remedies, Senator Igbeke again approached the Federal High Court, which gave an order restraining the Police and other law-enforcement agencies from arresting and detaining him. Find attached the court order.

“9. This development again angered the opponent of Senator Igbeke, an opponent that is enjoying the backing of a self-acclaimed godfather of Anambra politics. The said opponent then went to the Police and prevailed on them to ignore the Court order restraining the police from harassing Senator Igbeke over matters pending before the Federal High Court and the Court of Appeal.

“10. Nigerians will recall that it was these same people that misused the police in the same manner in 2007 when they got the late AIG Ige to abduct a sitting governor (Dr. Chris Ngige) in Anambra State in an attempt to brazenly and unlawfully remove him from office. The said AIG Ige later died in frustration when he was dismissed from the Force for his foolhardiness. May his soul rest in perfect peace.

“11. It would equally be recalled that it was these same people who attempted but failed to prevent Senator Igbeke from assuming his rightful seats in both 2003 and 2007 in the House of Representatives and Senate respectively. They are at it again.

“12. It would be recalled that so many judges have also been dismissed from the Bench in the hands of these same people. Their stock-in-trade is to misuse the institutions of the State for their personal ends.

“13. This time the Police should refuse to be used by these unscrupulous elements.”