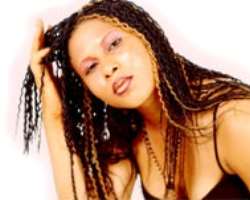 This Edo State born lady Violet Andrew may not be a regular face on your screen but she is definitely one of the interesting actress in Nollywood today.

The hard working woman who has featured in several flicks amongst which include Wrong Number and Tribulation is certainly climbing the ladder of success. In this interview with Bridget Amaraegbu, she speaks on her inspirations and future plans.

How does your day begin?

When I wake up I say my prayers and exercise my body. Normally, I go out to look for more jobs on daily basis.

As a growing child did you ever nurse the feeling that you'd become an actress?

Yes. As a child I've always wanted to act and each time our teachers ask us what we would be in future, I still remember that I respond I want to be an actress. My friends always laughed at me but I kept repeating it. And each time I watched Okonkwo in things fall apart I get encouraged because I loved the way he acts (Peter Edochie).

When I got to S.S.2 in secondary school I joined the drama group in my school. Then we went from one school to another, we even held competitions among different schools. And most times people come to me and say that I look like Shan George. Even though I didn't know Shan George, I told myself that I must meet her.

The first movie I featured in was titled Untouchable Sacrifice but it has not seen the light of the day yet. I don't know whether to say it died a natural death but I'm still hoping that it is released someday.

Which of your movies came out first in the market?

Wrong Number was the title of my first movie in the market.
And since then I can say that of all the movies I've done, the one titled Tribulation is the best.

How do you prepare to fit into roles?

Acting is not really about preparation, it's a gift from God. Any person without this gift can never act very well no matter how much he/she prepares. This is the most reason why people cannot fit into certain character but for me, I know I can fit into any character with ease.

How do you feel watching your own movie?

I feel happy and sometimes surprised because I've always wished to be on the screen.

Do you see any big deal in taking romantic roles?

No big deal. Sometimes you have to act with people you've never met before or even your enemy. I can't refuse a role because I'll be doing it with my enemy, I just have to do it, for me it's all about the job and does not go beyond that. I love my job and can not afford to miss role because I'll be smooched or kissed.

Apart from being an actress, what else will you appreciate doing?

Right now I also do picture modeling and I like it too.

Is there anything you had to sacrifice to get to this level today?

Yes. When I came into this industry, I did so many movies that I wasn't paid for but I just kept going because I knew I'll always get there.

I was not perturbed because I felt that I was paying my dues and also believe in the bible verse of sewing and reaping.

So how rewarding do you consider it today?

Financially I can say the reward is ok but I still hope it will keep improving as time goes on.

Are there any characters you abhor as a person?

I like people who are themselves, who can live within their income.

I really hate those who fake their personality, trying to prove what they are not.

If you are asked to give a word of advice to the AGN, what will it be?

I will advice the Actors guild of Nigeria to build an institution where every registered member can be trained. Some members can not even defend the AGN itself and it's not wise. There should be a kind of training where members will be taught the basics in Nollywood. Some actors /actresses just wear the I.D. card about and at times you find out that they've only done some extra's (no serious roles) because they are not trained.

What challenges have you faced in this industry?

There are a lot of challenges from producers, directors and even fellow colleagues. That of the producers is alarming but it all depends on the person involved.

Choose what you want is the advice I give to some of my colleaques, if you prefer to sell your body for roles then it's your business. Personally I don't see any challenges because I'm taking my job with ease, I'm not in a hurry. I want God to project me and not human so that my reign will be steady.

Let's talk about Violet now, what was growing up like for you?

I'm an Ishan woman from Edo State and growing up was fun until I lost my father. I am from a polygamous home and when my father died everything changed but I wouldn't want to talk about that now.

My mother gave birth to six of us, five girls and one boy so she had to cater for all of us alone.

I did my primary and secondary school in Lagos. Right now I'm still planning to further my studies.

How do you handle male fans and admirers?

I'm a very friendly person but not when it involves my body. I can be rude in that aspect for my fan's I love them and I don't feel embarrassed when they call me names I bear in movies.

Do you have any serious relationship right now?

I have a relationship but I'll like that to remain private.

What do you have for your fans this season?

I've done couple of movies this year that has not been released so before the end of this year and first quarter of next year, they'll have so much of me in the movies to enjoy.