Andy Uba Acquires a N49bn Jet... Yet no bank account 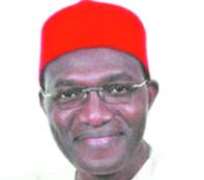 Though Andy Uba has no bank account in his name, huhuonline.com can disclose that the former special assistant (domestic affair) to President Obasanjo just took delivery of a N49 billion private jet. To conceal the entire transaction from law enforcement and media huhuonline.com learnt that Andy Uba instructed that the jet be delivered to his bossom friend Sayoe Dantata.

Andy Uba for eight years was the go to guy, he reigned supreme in Aso villa as the un elected defacto vice-president under President Olusegun Obasanjo, he determined who, where and when people could see the former president. His influence was monumental, thus revered. Many cabinet ministers had to submit their official memo for him to peruse prior to submitting to President Obasanjo for approval.

Andy Uba, hired as personal assistance domestic, with job description such as ensure that tuition fees of Obasanjo many children are paid as at when due, also doubled as President Obasanjo`s official pimp, as he was noted for driving his government assigned pimpmobile to the homes and offices of female minister to chauffeur them .

Recall that Farida Waziri led Economic and Financial Crime Commission commenced what has been viewed largely as a clampdown on politicians believed to have close ties with ex-president Obasanjo. This huhuonline .com learnt is Andy Uba `s worst nightmare. Sources close to him told our correspondent that trepidation has become his stock in trade, alleged to be one of the richest men in Nigeria; Andy Uba has no bank account to his name in Nigeria.

Andy Uba huhuonline.com learnt is now Persona non grata (PNG) with President Yar`dua, our impeccable sources within the villa told that since the election tribunal bribery saga, which was widely reported in the media, President Umaru Yar`dua has refused to have an audience with the embattled governor in waiting.

Huhuonline.com gathered that bribe money which was leaked to the media, was a major source of embarrassment for President Yar`dua, and it appears he is taking it personal, which is a complete departure from his mantra ?I don?t see what people do to me but what they do for me? . Andy Uba sources within the presidency disclosed provided the funds. But conception theorist has it that the funds actually came from Forbes list billionaire Aliko Dangote, who is not a favorite of the Yar`dua administration.

Aliko Dangote a monopolist by nature, abhor competition, under President Obasanjo, his fortune ascended, notable was Dan sugar. But since the advent of the Yar`dua administration, Dangote group has lost its monopoly, particularly in cement and sugar. Thus provision of funds for bribery and subsequent leak to the media was a calculated attempt to mortify Umaru Yar`dua led government, however, his friend Andy Uba took the fall for fear of the after effect of reprisal. Recall Andy Uba does business by proxies.

Andy Uba Emergence in the power game
But for Atiku`s greed, Andy Uba probably would have remained just a pimp for Obasanjo. To be continued