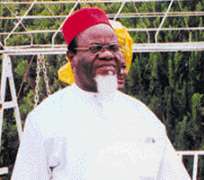 With election over, the sharing of the 'spoils of war' has begun. From available calculations, the South-East geo-political zone is holding the wrong end of the stick. From the enviable seat of Senate Presidency between 1999 and 2007, there is hardly a consideration for the zone for any plum position. Feelers are that the seat of Secretary to the Government of the Federation is just the oyster. Can that assuage the flaming anger, passion for equity and justice, and a yearning to be within the effective corridors of power?

There is a bubbling feeling that their straining for the Speaker of the House of Representatives, in the non-attainment of the seat of Senate presidency is far removed from them, and taken to their brothers in the South-West. And are they billowing forth in suppressed anger?

The embers of the flame is fanned by history. Many of them see the unfolding scenario as an indirect re-enactment of an episode in 1951, when the South-West stealthily took their political mantle overnight preventing the legendary, Dr. Nnamdi Azikiwe from becoming the premier of the Western Region. That singular act produced and popularized the phrase 'Cross-carpeting' in the nation's political lexicon.

With a superlative performance for the PDP in the elections, by the South-East, many of them have already taken it for granted that they will be counted among the numbers, when the 'chickens come home to roost.' They were obviously counting their chicken before the eggs hatched; dancing lame before the real dance.

Now, it's back to the drawing board; with just one senator, and about five members of the House of Representatives, the South-West unbeliverably appears to be leading in the contention for the seat of speaker. To add more impetus to the force, there are unconfirmed plots for the Action Congress of Nigeria (ACN) federal lawmakers elect to 'cross carpet' to the PDP to clinch the position.

Former Anambra State governor, Dr. Chukwuemeka Ezeife rues over the dilemma. '' I am talking about a situation, when the country will be ruled without the input of the zone. There are five principal officers who rule the country politically. They are the president, vice president, senate president, speaker and the national chairman of the party.

Any group that is outside these, is outside the government. The South-West has nobody to become the speaker or senate president. So automatically, it ought to go to the South-East.'

Fifth columnists
He sees behind the curtain and unveils a possible conflict with the president. 'We don't want any conflict with the enemies of Ndigbo to succeed in poisoning the relationship between the president and Ndigbo. We expect him to be fair.' The leader of Obigbo, a socio-cultural group, in the South-East, Chief Charles Ahize points at a grand conspiracy against the South-East.

'I'm surprised that this grand conspiracy against the South-East, that I grew in is still on. They created the South-South to guard South-East. It is only South-East that has 5 states. Others have 6 and 7 states.

'They deliberately used the South-South to block our access to the external world. This one is a calculated game plan to short change the zone.'

Corroborating Ahize, Chief Ziggy Azike, a former governoship candidate of the All Nigeria Peoples Party(ANPP) in Imo State, blamed the people of the South-East for their naivity… expressing his lack of confidence in President Goodluck Jonathan in redressing the apparent inequity in the zoning formulae, he accused the zone of embracing him without conditions. 'I never had confidence in Jonathan. We're so naÃ¯ve as a people. He came for our support and we gave it unconditionally.

'We forgot that he removed two Igbo men from important positions and started celebrating the Chief of Army Staff he gave us. The Inspector-General of Police and Chief of Defence Staff were Igbomen.

He removed them and gave us Chief of Army Staff (COAS). COAS is inferior to Chief of Defence Staff. He took the chairman of the party from us since January.'

Rationale
Shortly after the end of the general election, the South-East caucus in the House of representative started making a case for the position of the speaker of the House of Representative to be zoned to the area. The bid is hinged on the impressive performance of the PDP in the geo-political zone, coupled with the fact that apart from the South-South zone, the zone gave the highest number of vote to President Goodluck Jonathan to enable him emerge victorious in the April 16 presidential election.

It was taken for granted that the zone will get the position. This is against the backdrop that the party performed woefully in the South-West in both the National Assembly and governorship polls. The PDP lost almost all the National Assembly seats which it is presently occupying, to the ACN political hurricane that blew across the South West. The speaker of the House of Representative, Dimeji Bankole also lost his seat in the election.

However, indications emerged last Sunday that the party has decided to stick to its current power sharing formulae. Under the arrangement, the North Central would retain the Senate presidency, which it has occupied since 2007.

While the speaker of the lower chamber of the National Assembly would still come from the South-West. A top party chieftain in the South-East confided in Daily Sun early in the week that the party leadership and the presidency have resolved to give the zone the position of Secretary to Government of the Federation (SGF). According to the party chieftain who would not want his name in print, the reason for the retention of the existing power sharing formulae is based purely on religion.

Daily Sun gathered that the argument is that since both the President and the Senate President are Christians, there was need for the Speaker to be a Muslim to make for religious balance. Thus, the party is seeking to retain the speaker position in the South-West.

'The result of the just concluded general elections show that the PDP in the South-East received over 85 % support in the National Assembly elections, and about 97 % in the presidential election. The total votes of 5.1 million represent almost a quarter of the total valid votes received by President Jonathan in the presidential election. It is therefore incomprehensible that over 85% South-East support for the PDP in the National Assembly will be sacrificed for any reason whatsoever', the federal legislators stated. For them denying their geo-political zone the headship of one of the two chambers of the National Assembly would be spurning success, while rewarding failure.

Religion and history
The South-East parliamentarians added that the issue of religious balancing in zoning the National Assembly leadership in the next dispensation does not arise at all. 'We may recall that in the second republic, while the President (Shagari) was a Muslim, the Vice President, Senate President and Speaker were all Christians. Hell was not let lose. During the 1993 presidential elections, the South-East put its weight behind the SDP's Abiola/Kingibe candidature- a Muslim/Muslim ticket.

' In 2007, the President of the Senate, Senator David Mark and the Speaker of the House of Representative, Patricia Etteh were Christians. In the current legislature, both the Speaker and the Deputy speaker of the House of Representatives are Muslims. Religion has never been an issue. How has it now crept in surreptitiously', the legislators queried.

But just as the South-East legislators are pushing their case, the South-West is not relenting it its bid to get the speakership of the House. The South-West lobby group headed by former President Olusegun Obasanjo is reportedly making overtures to South-West legislators elected on the platform of the ACN to defect to the PDP so as to shore up its chances of the zone producing the speaker.

The former president is said to be targeting about 10 ACN legislators. Presently, there are only three PDP House Reps members-elect from the South-West. They include Ajibola Muraina, Mulikat Adeola and Odebunmi Dokun.

Adeola, a Muslim is said to be the preferred choice of the presidency to succeed Bankole.

There seems to be a systematic plan to black out the South-East from the process of deciding which zone gets what. According to a PDP chieftain in the South-East, Chief Okay Muo Aroh, at the moment, the zone is not represented in the National Working Committee (NWC) of the party. It is the NWC that will preside over the sharing of the political booty.

The seat of National chairman zoned to the South-East is presently being occupied by the Deputy National chairman of the party, Mohammed Bello in acting capacity. Following the removal of Dr Okwesilieze Nwodo, the party has not made any effort to fill the position with a south easterner. The tenure of the National chairman would lapse in March next year.

Aroh said for equity, somebody from South-East must be nominated to assume office as the national chairman of the PDP immediately before the zoning of political offices. 'We must be given our rightful position in the ruling party which we have laboured for. You must have to start from the basics. Which is to say the national chairman of the party must be determined. Who is Bello representing? Bello going there as the acting national chairman, is he representing the South-East? Or are we not entitled to be part of the decision making process in this country? There is nobody from the South-East who is in the NWC, which is the body that will be taking the decision concerning the new government,' he stated.