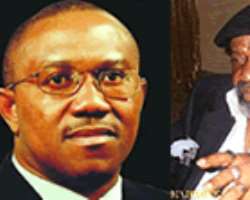 Elections in Anambra Central Senatorial Zone have come and gone with winners and losers. But one victory stands out and will remain an issue for public discussion for a very long time. That victory is the emergence of Dr. Chris Nwabueze Ngige, the Action Congress of Nigeria(ACN) candidate as a senator elect.

Before his emergence in that election as the senator-elect for Anambra Central Senatorial zone, the real popularity of Ngige could not be ascertained, because it did not reflect in the voting pattern of earlier elections. It is not in doubt that in Anambra State, Ngige for many years now, has remained the most popular politician. His popularity manifested when he became the governor of the state and has remained very high many years after he left office as governor. That popularity did not just emanate. It has its cause and is likely to stick for a long time.

Before Ngige assumed position to administer the affairs of state as Governor, the state was in a very bad shape of under- development. The situation was so bad that there was hardly any good tarred motorable road in the whole of the state. He assumed office and immediately began to tackle the ugly situation. He began to change the status of the state from the position of under-development. He identified the greatest need of the people of the state and took a decision to sacrifice his personal interest to provide those needs for the people. That decision was in contrast with what his predecessor in office practiced and which subjected the state and its numerous roads to an abysmal dilapidated nature.

The three years of Ngige's stay as governor affected the lives of the people positively and the fortunes of the state began to have a boost. For the first time in many years, Ngige made the people to have faith in government, to believe that there were a lot of things government could do to make life more meaningful to the masses and everybody was delighted at it. Even Federal government roads were rehabitated, without minding whether or not the money spent on them should be refunded. His argument then was that the then President, Chief Olusegun Obasanjo and his team of ministers seldomly plied the roads in the state and indeed did so only when they had official functions to perform. Such functions did not come often. It was obvious that those who used the bad roads and other neglected facilities in the state were mostly the people of Anambra State who felt the pinch of their neglect. He spent a whooping sum of N7 billion which was later refunded to his successor in office. The fact however remains that although he was not refunded, an indelible mark has been made and a political point scored. All that Ngige needed at that point was to give the people of the state good road network and other facilities, and he recorded an indelible mark which he is still reaping.

Wherever Ngige goes today in the state, he is still applauded more than any other politician. The puzzle however, remained that before the just concluded Anambra Central Senatorial election in which he was eventually declared the winner, he contested the gubernatorial election in 2007, and in February last year, and by INEC results, did not win. That was most surprising because those results did not reflect the perceived general acceptability he was and is still enjoying. That was in contrast with the ovation which he receives wherever he goes even till date, to the extent that his presence always equates to that of the sitting governor who indeed does not enjoy being in any event at the same time with him.

At the beginning of campaign for the 2011 general elections, Ngige did not appear early enough on the political field. He possibly did not make up his mind in time to contest the Senatorial and there was no governorship election since the incumbent Governor Mr. Peter Obi still has to stay until 2014. His legal battle for the gubernatorial seat of Anambra State was yet to be decided by the tribunal.

Before Ngige declared interest to contest the Anambra Central senatorial election both the Anambra State governor, Mr. Peter Obi and the former Minister for Informational and Communication, Prof. Dora Akuyili whom he persuaded to resign her ministerial position and contest the election under the All Progressives Grand Alliance (APGA) must have felt that the battle was a minor one basking on the antecedent of Akunyili as the Head of NAFDAC/ Minister and the incumbency of Obi on whose back she thought she could ride on to ascend the elective political throne.

There is no doubt that as soon as Ngige came into the senatorial battle, the field became hot and Obi who had met Ngige in the gubernatorial race knew for sure that he had to dress up for a fierce battle and he did. He quickly re-arranged his strategy and made the government lodge the unofficial headquarters for Akunyili's campaign. From that moment, Akunyili moved into the Government Lodge, the official residence of Obi until two days to her election. The governor was known to be allergic to spending money but that was not to be in relation to Anambra Central Senatorial zone election, because he needed Akunyili to win it at all cost. Although, APGA candidates also contested the Anambra North and South Senatorial Zones, the Governor paid more attention to that of Anambra Central Senatorial Zone. The principal reason was that he did not want the seat to go to Ngige. He would rather prefer another candidate to win the seat. But judging from his antecedent, he was convinced that Ngige was most likely to clinch it.

It was obvious from campaign responses that both Ngige and Akunyili were acceptable to Anambra Central electorate. What indeed was difficult to determine was whether Obi's identification with Akunyili's campaign was a plus or minus for her. From indications, she relied so much on Obi and his supposed power of incumbency which amounted to nothing.

Mr Peter Onyeka who commented on the election result said 'Prof Akunyili had the opportunity of winning the election if she did not bring in the governor to campaign with her.'

He was not alone in that view as Mrs. Elizabeth Igbokwe also said 'I would have voted Prof Akunyili if she carried out her campaign without Peter Obi.'

There was however, a divergent view as people also believed that Obi's presence enabled her to get as much vote as she received in that election. Mr Jerome Maduka for example said that 'Prof. Akunyili was not a politician and therefore could not have gone far if not for the governor's assistance to her.'

All in all, the salient fact is that Ngige battled a sitting governor and a former Minister at the same time in the senatorial election and emerged victorious. The lesson from that is that in whatever position anybody finds himself or herself, it is important to register an indelible mark, because the benefit may come many years later. The service rendered to the people of Anambra State by Ngige many years back is what he is still reaping its benefit today, a lesson for Nigerian politicians in particular.