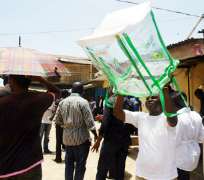 Already, there is anxiety in the land with a thick cloud of uncertainty covering the political atmosphere. Imo citizenry are scared that if mishandled, the supplementary poll might degenerate to avoidable mayhem. Some of them have urged INEC, security agencies and stakeholders to save the state avoidable mayhem.

Assurance from INEC
However, the INEC, yesterday, assured the citizenry of a peaceful, free and fair election stressing that  it had made adequate arrangements for credible balloting.

INEC official displays an empty ballot box
Chief Press Secretary to INEC Chairman, Mr. Kayode Idowu, told Vanguard that there was no cause for alarm. He said:

'We are taking the election seriously. We have four Resident Electoral Commissioners and four National Commissioners on ground. Security agencies are also on ground. With the level of security on ground, the fear that violence may break out is unwarranted.'

The election will hold after spirited efforts by the All Progressives Grand Alliance, APGA, and its governorship candidate, Owelle Rochas Okorocha, to stop the poll through the courts hit the rocks. The absence of an Abuja Federal High Court Judge, Justice Bilkisu Aliyu, who was assigned the case meant that there is no judicial declaration stopping INEC from conducting the election was made.

To give credibility to the exercise, some INEC staff serving in Imo State have been suspended from office and others were charged to court for their alleged complicity in the political stalemate now being experienced in the state.

This is coming as major stakeholders and combatants in the election met with one another in a series of meetings. Vanguard gathered that they also met separately with President Goodluck Jonathan said the goal is to ensure that the outcome of today's election is acceptable to all. This will save the state from unnecessary tension and halt likely post-election litigation that can nullify the election.

Going by provisions of the Electoral Act, the election should be held at most 150 days and at least 30 days to the end of the current dispensation. Today, May 6, is 23 days to the May 29 handover date, which leaves a clear landmine that could be detonated by an aggrieved loser.

At press time, Vanguard learnt that one issue hindering the 'arrangement' was whether or not the beneficiary (Governor Ikedi Ohakim of PDP or Rochas Okorocha of APGA) would play ball and deliver at the end of the day. A source said that electoral commissioners considered hostile to one of the leading political parties have been redeployed, to pave way for a good outcome.

Why INEC sanctioned staff
Speaking on the suspended and prosecuted staff, the supervisory Resident Electoral Commissioner, REC, for Imo State, Aniedi Abasi Ikoiwak, who resisted the temptation of rolling out names of the affected INEC staff, yesterday in Owerri said: 'We have thoroughly examined all INEC staff in respect of the conduct of past elections in the state and those found wanting have been suspended and some others charged to court.'

Ikoiwak said the electoral umpire had discovered that almost everybody in Imo State now claims to be an observer, adding that as a result of this startling discovery, the commission had introduced a fresh revalidation exercise for the accreditation of observers.

Warning that any fake observer caught would be punished, Ikoiwak also disclosed that 90 per cent of the people that would handle the supplementary poll, including collation officers would come from outside the state.

He said: 'INEC staff have been brought from six states and they will go to the affected local government areas and if we discover any funny or strange conduct from any of them, we will act accordingly.'

Ikoiwak said that four electoral officers appointed from different states have been posted to the affected four local council areas, adding that there will be total restriction of movement with effect from 10pm yesterday.

He added: 'We are poised to live up to expectation. We are not interested in who wins or loses but to ensure that the exercise is credible and transparent. Results will be announced after all electoral formalities had been concluded.'

'INEC does not want to take chances in case we do not have full complement of corps members. We were given directive to deploy our competent staff to conduct the supplementary election in Imo State. If the situation arises where the corps members are not eager to participate, INEC can as well make use of its staff.

That is why staff from Enugu and other neighbouring states are being invited to report at Owerri for the exercise. If we do not have full complement of corps members to take part in the supplementary election.'

Police deploy 10,000 men
To ensure security at the election, the Nigeria Police has deployed over 10,000 of its personnel in the four local council areas where the planned supplementary governorship and House of Assembly polls would be held today in Imo State.

Deputy Inspector General of Police, DIG, Mr. Ivy Okoronkwo, who disclosed this during a pre_election press briefing at the Police State Headquarters, Owerri, also assured the citizenry of the neutrality and preparedness of the security agencies to play their constitutional role during the poll.

Noting that other sister security agencies will provide a good number of their personnel to complement police efforts, the DIG also said that each polling unit would be adequately manned and that vehicular patrols would cover all the polling units in the council areas.

The DIG who warned that thuggery and hooliganism would not be tolerated in any part of the state, and that anybody caught with any offensive weapon will have himself to blame, stressed: 'The use of tinted glasses, covered number plates or provocative inscriptions or slogans is prohibited. All the political parties participating in the supplementary elections are advised to avoid making inflammatory statements capable of heating up the polity that is already charged.

Okoronkwo equally urged Imo people not to see the exercise as a do or die affair, even as he appealed to parents and guardians to warn their children and wards to desist from any act of violence and other vices that could mar the smooth conduct of the election.

Judge stalls APGA's bid to stop INEC
Spirited efforts by APGA and its governorship candidate, Okorocha, to invoke the original jurisdiction of a Federal High Court in Abuja and stop the INEC from going ahead with its plans to conduct the election failed following the refusal of the trial judge to appear in court yesterday.

Though the acting Chief Judge of the High Court, Justice Ibrahim Auta, initially assigned trial Justice Donatus Okorowo to preside over the ex_parte application that was filed before the High Court by APGA, the case was later re_assigned to Justice Bilkisu Aliyu who failed to show up in court throughout yesterday.

Though the court clerks waited in expectation that the presiding judge would turn_up for both the APGA case and several other matters originally slated on the court's cause_list, they, however, packed their registers at about 4pm after it became evident that Justice Bilkisu would not anchor legal proceedings for the day.

With this development, the suit that was lodged at the high court by APGA as well as a similar one that was filed by five indigenes of Imo State, seeking the cancellation of today's supplementary poll in four local government areas of the state might have been reduced to an academic exercise.

The other five Imo indigenes that equally approached the High Court with a view to quashing INEC's bid to hold election in the state today were Chief Bob Njemanze, Kingsley Ihegworo, Chief Alan Onyemaechi, Nwokedi Jideofor and Emmanuel Ihim.

They are pleading the court to declare the planned supplementary governorship election in the state illegal and unconstitutional.

APGA via a motion on notice it filed through its counsel, Prof. Francis Dike, SAN, sought two injunctive reliefs, stopping the said election.

The party warned that unless the court stopped the election, there might be a breakdown of law and order in Imo State today.

In asking the court to stop the supplementary elections in Imo, the party raised several grounds upon which the court should rely in granting them the reliefs among which were, 'That election into the office of the governor of a state by law must be conducted not earlier than 150 days and not later than 30 days before the expiration of the term of office of the last holder of that office.'

According to the processes it filed in court, the cancellation of Mbaitolu Local Government Council election and result after same was declared by the appropriate/ designated officer of INEC was ultra vires the powers of the commission.

In a 25_paragraphed affidavit that was attached to the suit, the deponent, Mr. Jude Nsofor, averred that Okorocha won 12 out of the 24 local government councils where election was held while the Peoples Democratic Party's candidate, Ikedi Ohakim won 11.

According to him, by the released result of the Mbaitolu Local Government Area by INEC upon conclusion of the election in the council area, they led the other contestants with 17, 757 votes while the PDP runner up scored 12,440 votes.

He stated thus:'That of the said 11Local Government Areas declared to have been won by the PDP, the plaintiffs also scored not less than 25 per cent of total votes cast in five of the council areas namely, Aboh_Mbaise, Ahiazu_Mbaise, Ikeduru, Nwangele and Ezinihitte Mbaise local government areas.'

He maintained that the plaintiffs scored 299,253 votes out of the total votes cast in the election including Mbaitolu LGA result while PDP, the runner up scored 291,365 votes.

'Unless the defendant is immediately restrained by this court, the defendant will proceed with the conduct of the said supplementary election which may likely lead to break down of and order,' he added.