WE HAVE NOT OVERCOME ELECTORAL MALPRACTICES, SAYS MUSA 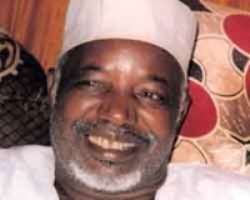 Former Governor of Kaduna State and gubernatorial candidate of the Peoples Redemption Party (PRP) in the state, Alhaji Balarabe Musa spoke with SAXONE AKHAINE on the 2011 polls in Kaduna. He claimed that electoral malpractices characterised the process in the state. Excerpts:

HOW do you feel about the outcome of the governorship polls in Kaduna State where you were a candidate?

What I can say is that the results of the elections defy any reason and logic. There were malpractices and there was also the non-existence election in some places but results were still declared. All these occurred at a level higher than we experienced in 2003 and 2007. A high number of soldiers and policemen were deployed to Kaduna for security reasons as they say, but the security personnel ended being the cause of insecurity as they participated in rigging. For instance, there were places like Giwa Council where I come from. Armed soldiers and police arrived at the council counting center, dispersed the crowd and took the polling boxes and went somewhere, accompanied by a known politician in the local council. And they went with officials of the Independent National Electoral Commission (INEC), but without party agents. These ballot boxes may have turned up later and counted and of course we can expect the result. Many things happened. Now, the implication for Kaduna and the whole country is what I have always said. There cannot be free, fair and transparent elections because the conditions are not there. The best we can hope for is an election that the Peoples Democratic Party (PDP) can tolerate. And what the PDP can tolerate under the circumstances is not much. Some of us in other parties know that we are contesting the election on the basis of the hope a little opening the PDP may allow to enable us register some existence. And that was what happened.

How did you take the speech by Governor Patrick Ibrahim Yakowa when he invited other politicians to form an inclusive government in the state?

Every imposed leader says the same thing. First, it is either that it turns out later to be beyond his power to do, or he ends up dishonest over the matter. For instance, what hands of friendship can he extend to the other parties and in what way? The essential question is did he win the election? They wanted to win the election, if they had won and we lost legitimately, they will not even be able to deny. They will ask for accommodation for the sake of peace, if he had won a free and fair election. In the Southern part of the state, there was no election. In the Northern part of the state, there were pretences, but there was no election.

After the presidential polls, the atmosphere was tensed. With the polls over, how can peace prevail?

I think the price to pay for peace is very high. And those who put Yakowa there will not allow him to pay that price. And you also have to take into account the fact that others outside Kaduna encourage the situation in Kaduna.

What can the government do to ensure peace continue to reign?

Those who think that they put the governor there will not allow him to pay the high price for peace. This is the problem. He is essentially a good man but what can he do. They will not allow him to pay the price for peace, the legitimate price for peace, because they want victorious arrogance. Nigeria does not have the culture of an inclusive government; it is a question of winner takes all. In this case the winner unfortunately is not the electorate, but a power bloc. That is the case in the South; it is the case in the North.

To what extent can the present scenario lead to the development of the state?

I think it will take the state backward, even farther. I know the governor very well. He is very good as a person, as a public servant. I am not sure as a politician, but he is basically a good person that can lead. For how long has he been the governor of Kaduna? Six months is enough for a governor to make a mark on his state, in a particular area. Has he made that mark? If he has made a particular mark in Kaduna I have not seen it. A governor who can perform makes such marks even between two to three weeks. Since he has been the governor what mark has he made? I will give an example. The Southern part of Kaduna does not have a single industry. All the industries we established during the Second Republic have now been destroyed. And he allows the situation to continue for as long as he has been the governor of Kaduna. If that section where he comes from does not have a single industry and he has found some, he cannot keep them alive and he cannot introduce new ones, what can he do? Those in control of power in Kaduna will not allow him to do it. And he is not revolutionary enough to use his power to do the right thing like we did during the Second Republic.

Now that you contested the governorship and lost…
No, I didn't lose. I was priced out and PDP and Congress for Progressive Change (CPC) rigged us out  because massive thumb printing of ballot papers and stuffing of ballot boxes took place in Kaduna. It was massive rigging by these two parties. They applied every dirty trick towards the elections in Kaduna. We knew right from the beginning what would happen and we made our points.

Are you going to challenge the results of this election?

We don't have the money to challenge the results, because going to court is very expensive. We can't afford the fees. Let the PDP and CPC go to court, we will not go to court. For instance, we envisage that CPC will go to court to claim that they won the election and not PDP, and PDP will go to court to defend what has been given to them. And we will watch and study how they will maneuver each other, when we know that both of them rigged the election. Already, we can tell them of instances of thumb printing of ballot papers stuffed in ballot boxes caught in lorries along Buhari Way in Kaduna. There was the case of a waste disposal vehicle that was caught. Also in Zaria, there was an instance where ballot boxes were found in two houses. I don't know what has happened to them, the ballot papers in boxes may have been thump printed in favour of CPC. But the people were caught and I am sure they are in the hands of the security. Another one was caught at Rigasa in Igabi council. And I think one or two other areas too.