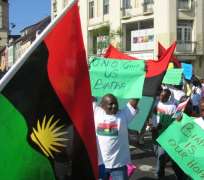 The importance of monuments, memorials and anniversaries cannot be over emphasized for a society or people such as Igbo/Biafrans. These people passed through a genocidal war that claimed a total of 3.1 million of their population between the years of 1966 and 1970. The pogrom was organized and executed against them by the Nigerian state and its people. It is a sad but very significant period in Igbo/Biafran people’s history. If it had been just one individual Igbo/Biafran that was murdered in the manner in which these many millions had been, such a person must be collectively memorialized and monuments raised to commemorate them and show the world how no human person should die. Every death in the Igbo/Biafran Genocide was and is still unjust and a most undignified way for a human being to die. And today there is a strident call for memorials and monuments on every inch of Igbo/Biafran soil to honor these dead heroes. That is how to be a grateful people and responsible society. This is what the Igbo/Biafran people mean when they say; echezona: Injustice must not be overlooked while the rest people are standing by. Igbo/Biafran society abhors ime mpu.

The study of the collection of a people’s monuments, memorials and commemorations gives you windows into the inner workings of such people. They give the researcher or visitor an insight into what the people consider as important to them. From the collection of a people’s symbols, memorials and celebrations one can deduce that particular society’s values and aspirations. Therefore every society or people must be careful in selecting the monuments they erect, the memorials they project and the people and events in their history that they venerate and celebrate.

Monuments, memorials and commemorations tell the story and philosophy of a people. They depict what the people live for and what they will be prepared to die for. Furthermore, memorials, monuments and festivals help posterity to think about and take conscious steps to avoid a repeat of the past that is being memorialized and symbolized when such experience had been sad and painful as in the case of Igbo/Biafran Genocide. As much as it is a classical truth that all positive gains have their cause from pain and, many times the more the pain the greater the value of the gain, but it is natural for a people to do everything in their power to avoid sources of pain.

Though, it is right to avoid the causes of pains, but not by some kind of escapism, such as trying to avoid discussions of and reflections on painful subjects and anniversaries or current events that are still inflicting pain. The people, Igbo/Biafran people must find a way to commemorate discomforting events of their past and boldly face the intimidating monster. They must carefully analyze its ramification and effectively resolve it. When the present generation of Igbo/Biafran people says never again or enough is enough, they must do something to back up with action these words. A people must have what is driving them; what they are living for and what they are prepared to die for. And in the case of Igbo/Biafran people it is freedom; freedom and separation from the Nigerian state.

Memorials, monuments and anniversaries are selfless acts of those who by fortuitous acts and events had escaped from being sucked in as direct victims of the atrocity being memorialized, symbolized and commemorated. Some other people suffered either to keep them, the erectors of monuments from suffering the pain that the victims endured. When that happens like in Igbo/Biafra Land, then one befitting way the beneficiaries can hope to pay back to their heroes would be to raise monuments to serve as physical reminders, always in focus and in so doing they will maintain an evergreen memory of the people that suffered and the events in which the suffering occurred.

When the right monuments and memorials are erected the present generation of Igbo/Biafran people would be telling the dead that they had neither believed in nor suffered for nothing. The living will be saying to all those who are watching that it is honorable to live for ideals, live by faith rather than living just for temporal power and fleeting material things. They will be encouraging heroic acts and what is supposed to be a higher level of human evolutionary attainment; the veneration of selfless acts. They will be letting the people know that in reality there are things that are and should be valued above just the immediate and temporary safeties and comforts of the moment.

Today’s generation will be acknowledging the sacrifices of those past with gratitude knowing that they can enjoy present pleasures because someone or some people in time past worked not just for their immediate needs and comfort but acted with posterity and future in their view. Has the reader ever tried to imagine how today’s world would be if past generations of human beings had remained as hunters and food gatherers? Igbo/Biafrans must realize that they have nothing in common with the rest of Nigeria and must separate themselves from them. Their kith and kin had been murdered by Nigeria and the best tribute, monuments and memorials they can offer these heroes is a separate and free state of Biafra for which the people died.

Just recently Nigeria held a presidential election and there was a post-election violence which claimed the lives and means of livelihood of hundreds of Igbo/Biafran people not because of their political affiliations but because of their ethnicity and religious/cultural beliefs. Starting from 1945 to 2011, 66 years now, no single year has passed by without Nigerians killing hundreds and thousands of Igbo/Biafrans for who they were rather than for the crimes they had committed. Therefore the most befitting monuments, memorials and anniversaries for the 3.1 million Igbo/Biafran heroes who paid the ultimate price in one of the most gruesome kind of genocidal pogroms of all time, orchestrated by the Nigerian state, is the erection of sovereign and independent boundaries of the Biafran state free from oppression and Nigeria.


As we have already noted, monuments, memorials and anniversaries are important aspect of every society and people. So a people or society like Igbo/Biafrans must find ways to immortalize events and heroes in their past. These will help to preserve and always keep in constant memory and view the works and sacrifices of these people gone by. The erection of the right kind of monuments and memorials must be encouraged and actively pursued as a part of a people’s collective program. A people or society can only be said to be heading towards doom when they neglect or in some cases consciously work hard trying to erase pointers and rudiments that remind them of their history.

All Igbo/Biafrans everywhere are being called upon today to individually and collectively work to erect monuments, memorials and commemorations in their hearts, at village squares, in their homes, at street corners, on their shirts. Fly Biafra’s flag wherever you live, in your cars, in your offices and at the entrance to your homes. To identify yourself as a Biafran, let Biafra’s flag adorn your front lawn, let it flap in the wind at the entrance to your house. In this way you will be honoring the 3.1 million heroes of Biafra who were murdered for no crime that they committed but for just being who they were. Go to your local office of Division of Motor Vehicle (DMV) and pay for special license plates that memorialize and immortalize Biafra and Biafrans. This is the right thing to do. This is the way to show the world that you care.

Being ashamed or negligent of doing these little acts in honor and memory of the 3.1 million heroes reduces the prestige of every living Igbo/Biafran as a human being rather than dignify them. Are you being conscious of what your Yoruba or Hausa friends will say? Now let me ask you, do you think that if the positions were reversed that these other ethnic groups would have been conscious of your feelings when they are memorializing their past heroes? Try to think it through as this is the most important aspect of our collective existence as a people and society. Should you therefore let shame or fear to rob you of the privilege of memorializing and immortalizing your past heroes? Supposing the position were reversed would you be happy with the survivors who do not care or are negligent of the sacrifices you had made on their behalf?

All Igbo/Biafrans everywhere must make effort to find organizations and programs that are working on Biafran projects and start donating money and materials to help facilitate their activities. You can start organizing, mobilizing and doing some good work for Biafra and her people today. It is right. This is how to erect befitting memorials and monuments for the past heroes. At the end of every day you should ask yourself, what have I done today that honored and promoted the dignity and memory of Igbo/Biafran past heroes?

We need to make it clear that all efforts and utterances at actualizing a sovereign and independent state of Biafra with clear and definitive boundary between her and Nigeria is not borne out of hatred for Igbo/Biafrans neighbors such as Hausa, Yoruba and the others. This is true even when these people hate Igbo/Biafrans with a passion. The aim is just to establish a society for the coming generation of Igbo/Biafrans where they are safe and treated with dignity, away from Nigeria and Nigerians. Igbo/Biafrans must realize that aiming for, donating to and working for the realization of the Biafran state, separate and different from Nigeria does not make them small or shrink their conception of the one world society or brotherhood of man. It just shows that they want to maintain their unique identity while remaining in good relationship with their neighbors.

Igbo/Biafrans, do not let anyone make you feel ashamed or appear small because you are trying to maintain your uniqueness in the world. You are just as good to be here on this planet, different and distinct, like the next person. And never let any person tell you that there is strength in unity as in the sense of One-nigeria and use that to deceive you. There is only hatred, death, lack of trust and exploitation for the Igbo/Biafrans in such unity as conceived in the concept of One-nigeria. You should be proud of the sacrifices of Igbo/Biafran past heroes because they did not die for any crime they committed but for being humans and believing, worshiping, thinking, talking and dressing differently. Those surely are no good reasons for a people to die.