The Duke And Duchess Of Cambridge Wed 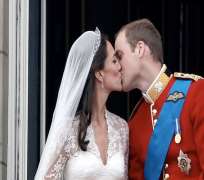 Prince William of Wales slipped a gold ring onto the finger of Catherine Middleton Friday, and the couple vowed to love, comfort, honor and to keep each other in London's biggest royal wedding in three decades.

Bells pealed over central London and flag-waving crowds roared in excitement Friday as Middleton arrived at Westminster Abbey to marry William, the second in line to the British throne.

Middleton wore an ivory and white satin dress with lace sleeves and shoulders, designed by Sarah Burton of the Alexander McQueen fashion house.

"You look beautiful," the prince told her as she arrived at the altar on the arm of her father Michael.

William wore the uniform of a colonel of the Irish Guards, a scarlet jacket and blue sash, as his brother, Prince Harry, accompanied him into the abbey.

Crowds cheered as his car drove the short distance from Clarence House to the abbey before the wedding, and they roared and waved as the newlyweds rode in an open carriage from the abbey to Buckingham Palace after the ceremony.

The couple appeared before about half a million cheering supporters on a balcony of the palace and exchanged a quick kiss on the lips -- then pecked each other's lips again a moment later.

Royal Air Force jets then flew over the crowd and the palace in formation, the official climax of the wedding celebration.

The prince and duchess went inside to a lunchtime reception for 650 people, hosted by Queen Elizabeth II. It featured an eight-tier wedding cake, the palace announced.

The couple will be known as the Duke and Duchess of Cambridge following their marriage, the royal family announced shortly before the wedding -- thus avoiding giving the newest member of the royal family any title that would implicitly compare her to Diana, Princess of Wales.

The most devoted monarchists arrived days before the event and camped out with Union Jacks on their clothes, tents and faces. Some traveled from as far away as Colombia.

Up to half a million people who didn't get one of the 1,900 invitations to Westminster Abbey were expected to watch the event on giant screens at Hyde Park in central London.

Kings, queens, priests and politicians began to arrive at the abbey shortly after 8 a.m., with celebrities such as Sir Elton John and Olympic gold medallist Ian Thorpe among them.

David Beckham arrived with his wife Victoria, with the soccer star sporting his OBE medal on the right lapel of his morning coat. Medals are traditionally worn on the left.

Street parties are being held across the United Kingdom, while protests threatened by Muslim radicals, anarchists and anti-royalists largely failed to materialize.

About 5,000 police officers are out on the streets, including 110 on horseback and 35 with sniffer dogs. London's Metropolitan Police reported 45 arrests by the time the reception began, mostly for breaches of the peace.

The world's media have deployed even more resources than the police did, with at least 8,000 staff working in London for the event.

William announced his engagement to Middleton in November after proposing secretly in a rustic cabin in Kenya in October.

He's the older son of Prince Charles and the late Diana, Princess of Wales; a grandson of Queen Elizabeth II; a military search-and-rescue helicopter pilot and, by one recent measure, the most popular member of the royal family.

Middleton is an art history graduate and the eldest child of self-made millionaires who run a party-supplies company.

Widely known as Kate before her wedding, the bride has now asked that she be called Catherine, the royal family said in the run-up to the wedding.

They met as college students at the University of St. Andrews in Scotland, sharing an apartment with a circle of friends before they began dating. She first caught his eye when she modelled in a student fashion show wearing a see-through dress over her underwear, British reports have said.

But the guest list is as notable for who wasn't on it as who was. Former Prime Ministers Tony Blair and Gordon Brown were not invited, leading to accusations that the royal family favors the Conservative party over Labour. Buckingham Palace responded that Major was invited not because he was a Tory but because he was appointed guardian of Prince William and his younger brother Prince Harry when their mother Diana died in a car crash in 1997.

Margaret Thatcher, a Conservative and the other living former prime minister, declined the invitation. She failed to appear at a Downing Street event in her honor last year because of ill health.

U.S. President Barack Obama also wasn't invited, raising some eyebrows. The royal family explained that as a matter of protocol, presidents were not invited. The U.S. ambassador to London was on the guest list, as were most members of London's diplomatic corps.

But Syria's ambassador was uninvited just a day before the wedding in light of his government's current crackdown on protesters. The Crown Prince of Bahrain, whose country is also clamping down on demonstrations, was invited but on Sunday decided not to attend.

The controversies and the couple aside, the wedding was a very traditional British event in some respects.

It included the Lord's Prayer, hymns and Bible readings typical of English nuptials, and the always nervous moment when the priest asks that if anyone present knows of a lawful impediment to the marriage, he speak now or "hereafter forever hold his peace."

Of course, the priest asking that question Friday was Rowan Williams, the Archbishop of Canterbury, the titular head of the worldwide Anglican church.

And while it's not unheard of for British weddings to include a singing of "God Save the Queen," this one was unusual in that the monarch in question was actually standing in the front row for it.

William gave Middleton a ring of Welsh gold, but she didn't return the favour -- and she did not, in her vows, promise to obey him.

Of course, if William does some day become king, Middleton will then presumably have to obey him.

A ComRes poll for CNN when the engagement was announced in November found that just over half of British adults thought William would make a better king than his father Prince Charles, heir to the throne; 58% said Middleton would make a better queen than Charles's second wife, Camilla, the Duchess of Cornwall.

But the online poll's 2,015 respondents were split on the largely theoretical question of whether the crown should actually skip a generation and pass directly to William when his grandmother Queen Elizabeth dies. Forty-five percent said it should, while 41% said it should not.