MY MAN, MY MARRIAGE - INI EDO 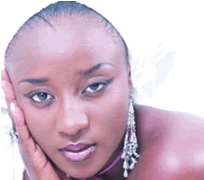 Ini Edo
Ini Edo is tired. Very tired. The actress, who lit the screen with her presence, confessed she's tired of doing same of the same movies. 'I am taking a stand against bad jobs,' she said. Bad scripts are not the only thing she's taking a stand against. The Akwa Ibom-born actress is also taking a stand for children living in the slums. She was recently appointed UN ambassador for environment. In this interview with SAMUEL OLATUNJI, the UN Habibtat Youth Envoy speaks on her marriage and new role.

How does it feel to be a UN ambassador?
It feels good and I feel appreciated. More importantly, I see it as an opportunity to further contribute to the society and affect the lives of kids in the slum.

So, one of your major responsibilities is the slum kids?

(Laughs) why not? I am human, besides we are not better than the kids on the streets or slums; it is just that we are privileged.  If we give these kids the right opportunity, support and encouragement they will go places. God didn't create them the way they are, He did not mean for them to live in the slum, under the bridge, or live below average; our environment made them what they are. My role as UN Ambassador is to draw attention to these with my status, give assistance to the limit of my ability and generally help these people out there to where they ought to be. I know it is not going to be an easy task, but this is a call to responsibility. Beyond acting and making people happy on the screen, we need to learn to stretch our hands and touch their lives.

How did you lobby for this thing?
Sam, you are not serious? (laughs). I didn't lobby for it o, I was working here in Nigeria when I got the call. Sometimes one must learn not to lobby for some things. Anyway, I don't think one lobbies for this kind of thing. I believe the UN people know we can use our goodwill and status to draw attention to the plight of the children living in the slums and other issues. Before you say it is from one affiliated group again, Sam, this thing came directly from the United Nations and we held a world press conference to that effect in Kenya. Ramsey Nouah and a Bollywood actor were also appointed ambassadors.

So, what next?
Charity work, visits to the slums, among many other things.

How come I don't get to see more of you in movies like before?

I am still acting o, but the truth is I am tired of the same of the same. Some of our movies are no longer exciting. It is disheartening to hear people compare our movies to the ones from neighbouring countries. We can do better, so, that is the reason I have decided to do only quality works. If it is not qualitative, I am not doing. It is beginning to tell negatively on our industry; people are tired of the half-hearted works some people put out and it is bad that some of us have our faces on the jackets of these so-called movies.

Are you saying you are quitting Asaba and Enugu?
That is not what I'm saying. What I'm saying is that if the script or the job is bad, it doesn't matter where it is being done, whether in Asaba or Abeokuta, I won't do it again. Bad jobs have nothing to do with geographical location. You can go and shoot a bad movie in America, while a good movie can be shot in Zamfara. If I get good scripts from Asaba or Enugu, I will go, and if I get bad story from America, I'll not do it. It is now about taking a stand for the collective good of the industry. I only want to do quality works.

Would the Asaba and Enugu cabal not blacklist you?

No, they are my friends; most of them understand my stand. I even had to refund a couple of payments after reading the scripts and not being satisfied with them. It is not a personal thing, it is a career decision for me. I have decided to only stand for quality works and I don't think that is too much to ask. I want to do works I can be proud of anytime.

Tell me about your dance movie - 'I'll take my chances'?

This is the first time I would be doing this kind of movie. I went all out as an executive producer alongside Emem Isong. We spent lots of money; I mean lots of cash and invested heavily in the production. We flew in the crew from abroad and adopted different approach by making a non-regular, Mr. Nigeria, Bryan, play the lead role in the movie. And we hired a dance coach. It is a movie people should look forward to. This is the best movie I've been involved in.

Are you going to the cinemas?
Yes, it is a cinema movie, done with intention to hit the cinemas. It would be ready before end of the year.

What is happening on the home front?
I'm enjoying my marriage. As you know, my husband came back on Sunday and we are having a nice time until you came along (laughter).

Am I a bad boy?
You are telling me (laughter).
How are you coping - marriage and movies?
It's been wonderful, but I will not deceive you to say it has been a bed of roses all along, we have our own challenges, but as partners we resolve issues and move on. I am very happy with my man and my marriage.

Are you happy in your marriage?
I am very happy; I married my own man. I have no cause for regrets.

There has been report about you not getting along with Oge Okoye, Uche Jombo and Mercy Johnson.  What went wrong?

I am not fighting with these people. I have made peace with myself. This year, I am not looking backward; I am looking forward. Some of these people are my friends; some are my colleagues. No hard feelings, the sky is wide enough to accommodate all the birds.

Should we expect any new thing from you?
Yes, the movie, my charity work, more movies and a lot of stuff I don't want to disclose yet.

Do men still toast you with your wedding band on?
Yes o. The wedding band does not prevent men from toasting you; I think it even attracts men. They think you'll want to play ball and won't disturb them like the single ladies. To every man chasing a married woman, the thought is whether she's not happy in her marriage, so she would seek happiness elsewhere. For your information, I am happy in my marriage, there is no need to seek another man's shoulder. And I need to say this to the other women; happiness does come from the bosom of another man. If you work hard on your marriage and pray, perhaps, God will restore the sparks.

Some marriages are not just worth it?
The only time marriage is not worth it is when you are losing your sanity or about to lose your life. Marriage is an institution ordained by God, we should give it our best shot. Little adjustment in our attitude could go a long way. It is not a blame thing; a man or a woman can cause the breakup of any marriage.

May I call you Pastor Ini? (laughter).
You are not serious.