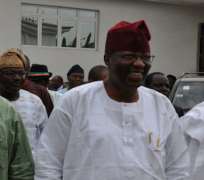 ABEOKUTA, April 22, (THEWILL) - Another twist was Thursday night (WAT) introduced into the governorship race in Ogun State ahead of Tuesday's poll as the two Yewa/Awori indigenes in the race: Prince Gboyega Isiaka of the Peoples Party of Nigeria (PPN) and Chief Adetunji Olurin of the Peoples Democratic Party (PDP) met to reconcile their grievances ahead of the poll.

According to the Commissioner for Information, Mr. Sina Kawonishe, the reconciliation meeting was called by Governor Gbenga Daniel with the aim of seeing both parties reconciling ahead of the Tuesday's poll, saying, "The two governorship candidates met under the auspices of the Governor of Ogun State, Otunba Gbenga Daniel."

He further said, "The meeting which took place on Thursday April 21st, 2011 in the Ijebu-Ode country home of Governor Daniel explored the possibility of collaboration in the April 26th governorship election between the two candidates, who come from the Yewa Division of Ogun State. After the exploratory talks, the meeting adjourned to continue at a later date."

THEWILL recalls that the poor performance of both parties at the National Assembly election held a fortnight ago has forced the parties to rethink their strategies having seen the Action Congress of Nigeria (ACN) benefit from the crisis rocking the PDP in the state after aggrieved members dumped the party for the PPN.

The emergence of PPN was a fallout of some PDP members who participated in the primaries held in the state, felt cheated and fused into the new party controlled and managed by state Governor Gbenga Daniel.

Meanwhile, the poor performance of both parties at the election prompted the harmonization discussion on how to unite to defeat the ACN, the party that floored them at the National Assembly poll.

The PDP and PPN are now strategizing for a possible bounce back in Tuesday's Governorship and House of Assembly elections. Sources with knowledge of discussions at the meeting told THWILL that the parties discovered that the combined votes the PDP and PPN got were higher than what the ACN polled in that election.