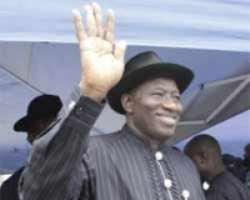 • Gets INEC certificate of return
•Govt to compensate victims of violence
• Leaders, NLC greet President over victory
RE-ELECTED President Goodluck Jonathan yesterday collected his Certificate of Return from the Independent National Electoral Commission (INEC) with a pledge to dedicate his new term to rebuilding Nigeria to meet the yearnings of the electorate.

He used the event to condemn the violence in some parts of the North, saying the youths being used by politicians to pursue parochial interest would not be neglected in the new dispensation.

Also yesterday, Nigerian leaders and the organised Labour expressed satisfaction with the conduct of the April 16, 2011 presidential election and rated it as free and fair.

The Nigeria Governors' Forum (NGF), which congratulated Jonathan for emerging the winner of the election, pledged to support the President in the implementation of his campaign promises.

While receiving the Certificate of Return, the President thanked INEC and its officials, especially its Chairman, Prof. Attahiru Jega, for not compromising his position to give Nigeria a credible election.

Jonathan noted that Jega had placed the country on the higher wrung of the ladder as the international community sees Nigeria as a country that can conduct acceptable election.

'This is the beginning of major changes in the country. Before now, the international observers used to paint our elections in different colours, but this year's election is different, first that of the National Assembly and then the presidential. The information we received and what we have read is that they have given us a passmark.

'It has to be so because of the competence of INEC officers and the position not to compromise your independence. Nigerians are happy with you because you have placed Nigeria on a higher wrung of the ladder and others have seen that we can at least conduct an election that would usher in a new government.

'We urge you to make the last leg of the election better than the presidential exercise. Both local and international observers commend us for conducting a credible election, and this is what Nigerians have been looking forward to for a long time.

'It is unfortunate that some parts of the country have been witnessing a series of crises, that is what the new generations of Nigerians would not want to happen. We hope that in the next four years, issues like these will never degenerate into violence.

'I want to re-assure Nigerians that we would run an open government, we will give a sense of belonging to all Nigerians. Those who have lost property, we will take inventory of those affected and we assure them that we will move in to see how we can be of assistance to them. We want to use this opportunity to plead with all our religious and traditional rulers to condemn these acts so that our country would witness rapid development, because nobody wants to invest in a violent-prone economy, where people fight, kill, destroy and maim one another,' he said.

The NGF, made up of the 36 state governors of the federation through its Director-General, Asishana Okauru, in a congratulatory message to Jonathan, asserted that last Saturday's election was the freest and fairest since 1999.

The Nigeria Labour Congress (NLC) has also congratulated Jonathan on his victory at the polls. It particularly lauded the President for delivering on his promise to conduct credible, free and fair elections.

NLC described Jonathan as a true national leader as the votes that gave him victory cut across political, class, religious, regional, ideological or even party affiliation.

The NGF however appealed to the President to be magnanimous in victory and urged his opponents to be 'gallant and gracious in defeat. We also plead that all the contestants join the president-elect in the development challenges facing our great country.'

The Senate President David Mark has said Jonathan's election would usher in a bright future for all Nigerians.

Mark said the polls marked a paradigm shift in the nation's electoral process, 'because the electorate voted for the Nigerian candidate.'

The Liberian President, Mrs. Ellen Johnson-Sirleaf has congratulated Mark on his victory at the National Assembly election.

In the message delivered by the country's Minister of Foreign Affairs, Toga Gayewea McIntosh through the Liberian Ambassador to Nigeria, Al-Hassan Conteh, Johnson-Sirleaf urged Mark to bring his wealth of experience to bear in the service to his fatherland.

Also, the Speaker of the House of Representatives, Dimeji Bankole, has congratulated Jonathan over his victory, saying his election is a 'further consolidation of our democratic development.'

His Special Adviser on Communications, Chief Kayode Odunaro, in a statement in Abuja, said the outcome of the elections largely reflected the wishes of Nigerians to elect leaders based on credible and transparent election, adding that the widely acknowledged credibility of the 2011 election is a fulfilment of the Peoples Democratic Party (PDP)-led Federal Government's promise to bequeath the nation a free, fair and credible electoral system.

The Benue State Governor, Gabriel Suswam, in a statement, said the fact that Jonathan received enough support to 'meet and surpass the constitutional requirement across the states of the federation, confirms that he is a detribalised Nigerian and the choice of the people.'

Suswam said he feels justified because he worked hard to secure the victory as the North Central Coordinator for the Jonathan/Sambo Campaign Organisation.

And as a way of cooling frayed tempers on the outcome of the presidential elections, Swift Count 2011 has called on the INEC to post each polling unit result on its website.

The First Co-Chair of the election monitoring body, Dafe Akpedeye, who stated this in Abuja, remarked that the step would strengthen the authentication of the results.

The Abdulwahed Omar-led NLC urged the loser to concede defeat; congratulate the winner and contribute to national development rather than become symbols of intolerance and strife.

It charged those that are not convinced about the outcome of the elections to seek redress within the laws and constitution of the country.

Labour also urged Jega to, in furtherance of the great strides already made, do a thorough evaluation of the entire process and courageously bring to bear the needed re-strengthening of its machinery for greater efficiency in future assignments.

Omar said: 'As evident from the misguided youths who protested the presidential elections, an immediate challenge is mass education and mass employment of the people. Also as agreed, the new minimum wage of N18,000 and the follow up general wage review in the country is an immediate task that must be done to reduce poverty and want amongst the populace.'

The result of the presidential election, Governor Jonah Jang of Plateau State has said, would ensure the growth and development of the nation.

Jang said the elections had also shown that Nigeria had out-grown tribal and religious politics but are persuaded by issue-based politics.