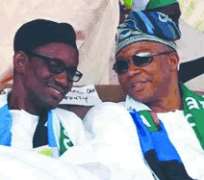 Fresh facts have emerged on why the renewed alliance talks between the Action Congress of Nigeria (ACN) and the Congress of Progressive Change (CPC) collapsed.

According to the ACN presidential candidate, General Buhari's refusal to yield ground and personal ego botched the deal which would have seen the two parties presenting a common candidate for tomorrow's presidential election by the two opposition parties.

Indeed, the erstwhile boss of the Economic and Financial Crimes Commission (EFCC) was more revealing than the national chairman of the ACN, Chief Bisi Akande who had told journalists on Wednesday that the CPC leaders were prevaricating on the alliance deal.

Ribadu disclosed that the ACN saw itself as the senior partner in the agreement having performed exceedingly well at last Saturday's National Assembly polls and had expected the CPC to be more considerate in its demands.

'This isn't blame game moment; we tried honestly. We attempted to come out with a strong opposition to the PDP. On our own part, that is the ACN, we made every necessary sacrifice, including the offer of stepping down of our presidential candidate in consideration of this alliance, because we saw that Nigerians wanted it and we also believe that it is the right thing to do.

'But the other party didn't fulfill its own part and it wasn't a bigger sacrifice as our own, but sadly they didn't just meet up with what was agreed. Originally, we agreed that we are the senior partner in this alliance attempt, because we have bigger electoral number, we have more votes across the country, we have more in terms of number of National Assembly elected. But we still considered it necessary and we did everything, including offer of sacrifice of allowing the candidate of the CPC to lead and we will get the vice-president, eventually but they refused.

They agreed and then they turned it down again. Sadly, that was the fundamental problem that really led to the collapse. Of course, you know there were several attempts in the past to bring the parties together, but it failed.'' Mallam Ribadu, however, expressed confidence that the ACN would win tomorrow's election, even at the first ballot.

However, General Buhari, in a statement signed by his spokesman, Mr. Yinka Odumakin, denied he was responsible for the inability of his party and the ACN to reach an arrangement.

While stressing that the decisive moment Nigeria enters this weekend requires sobriety on the part of leaders who care about the fate of the suffering people of Nigeria, General Buhari explained that he embraced the renewed talks between the two parties in the best interest of millions of Nigerians yearning for change with great enthusiasm.

'The talks, however, ran into difficulties when the ACN insisted the only condition for agreement was that they must produce the vice president. By the electoral laws, this was virtually impossible before this election. We suggested that they should let us jointly go into the elections and jointly form the government after our victory. But our friends were not ready to take us on our honour and went to the media.'

While regretting the inability to get the parties to agree to harness their electoral fortunes before Saturday, General Buhari said the task at hand was to get rid of the PDP at the polls through voters mass turnout and eternal vigilance from accreditation to the final announcement of results.

He called on millions of his supporters across Nigeria to troop out en-masse tomorrow and vote him in as the President 'This is our finest hour to get the PDP out and we must not miss it. The rigging machine must be smashed on Saturday,' he declared.

While agreeing with Buhari on the need to ease out PDP from the saddle, Ribadu dismissed the endorsement of Dr Goodluck Jonathan by the Labour Party and about 45 other political parties on Wednesday.

'We aren't jittery really, because we have also got endorsement of 12 parties. It isn't just Jonathan that got endorsement and what matters is the endorsement of Nigerians; those who are going to vote on Saturday are the ones whose endorsement we are looking for and we are pleading with all Nigerians to vote wisely. Let us change our country; we need the change. PDP isn't change, but a continuation of the rot and we believe that Nigerians are aware of that,'' Ribadu said. Reacting yesterday to the development, Prof. Tam David-West lauded Buhari for calling off ACN's bluff.

'I continue to be very proud of General Buhari. He is a man of honour and principle. Pastor Tunde Bakare should not step down for ACN. ACN is not God. Only God makes leaders. Gen. Buhari and Pastor Bakare are sent by God to save Nigeria and by the grace of God we will win.'

Meanwhile, the National Chairman of the ACN, Chief Bisi Akande has said that there is still a possibility of an alliance between his party and any other top-ranking political party against the PDP.

Speaking with aviation correspondents in Lagos, Akande said the alliance will be explored only when there is no clear winner in tomorrow's poll.

On his assessment of the National Assembly elections, Chief Akande said: 'The Independent National Electoral Commission (INEC) wants to be very transparent and credible, but the elections so far have not been free and fair. The intention is clearly different from the action.

'The intention of the INEC was to have it right, but what you see is total manipulation particularly by the security agencies and the lower level of INEC staff because the PDP induced people with plenty of money. They managed to use money to manipulate the INEC officials at the lower level of the commission and they used them to intimidate and to falsify the results of the election.'

He said the drama unfolding in Anambra Central Senatorial district involving ACN's Chris Ngige and the All Progressive Grand Alliance (APGA)'s Dora Akunyili was an attestation that INEC is somewhat confusing Nigerians.