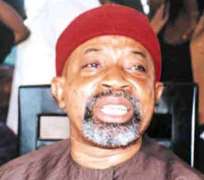 This followed a petition filed by the Action Congress of Nigeria (ACN ) candidate and former Governor of Anambra State, Chris Ngige, who alleged irregularities in the three wards.

Ex Information Minister, Dora Akunyili of the All Progressive Grand Alliance (APGA), had claimed victory in the polls. She even approached the INEC for certificate of return.

The Returning Officer, Alex Anene had alleged that Akunyili and officials of APGA had pressured him to declare Akunyili winner. She allegedly promised to 'settle' Anene with N10 million, and a duplexe.

The commission said a date for the rerun would be fixed soon.


The decision was announced at a press conference in Awka by the newly appointed Returning Officer for Anambra Central, Prof. Charles Esinone. The Resident Electoral Commissioner, Prof. Chukwuemeka Onukaogu, also attended the briefing, where he told newsmen that Esinone had been replaced the former RO, Mr. Alex Anene.

advertisement
The major candidates in the election are a former governor of the state, Dr. Chris Ngige (Action Congress of Nigeria); ex-Minister of Information and Communications, Prof. Dora Akunyili (All Progressives Grand Alliance); and the incumbent, Chief Annie Okonkwo (Accord Party).

The declaration of the result ran into a deadlock when Anene said on Sunday that he was being pressurized by officials of the state government and APGA to declare Akunyili as the winner of the poll.